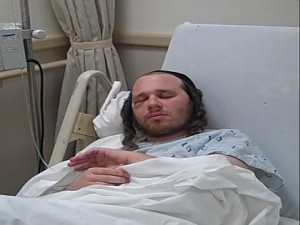 The following is a NY Daily News article:

Jewish activists in Brooklyn are offering a $5,000 reward to help solve a brutal robbery that left a Hasidic teacher unconscious Thanksgiving night.

The victim, Joel Weinberger, 26, was walking from Be’er Torah Yeshiva in Williamsburg to his nearby home at 7:20 p.m. Thursday when up to three men jumped from behind and punched him repeatedly, community leader Isaac Abraham said Monday.

“They rearranged his face, beating him beyond recognition,” Abraham said. The father of four suffered multiple injuries from the Wallabout St. assault.

He was back home Monday after spending four days in the hospital.

Detectives from the Hate Crimes Task Force interviewed the young teacher, but cops have yet to classify the case as a bias attack.

Abraham contended Weinberger offered to give his wallet but was instead pummeled, his religious garb was torn apart and only his cell phone was taken.

Solomon Spielman, an administrator at the small yeshiva, described Weinberger as a well-liked teacher who joined the faculty this year.