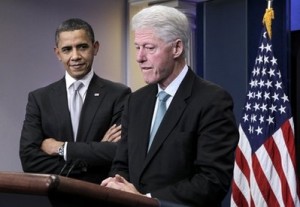 It was an extraordinary sight, even by White House standards.

Two presidents at the podium in the White House press room, discussing Democratic infighting over a tax cut extension plan.

Then, an even more extraordinary sight: President Obama leaving, and former President Bill Clinton staying behind to hold court with reporters for 20 more minutes.

“I’m going to let him speak very briefly,” Obama said. “And then I’ve actually got to go over and do just one more X-Mas party. So he may decide he wants to take some questions, but I want to make sure that you guys hear it from him directly.”

Replied Clinton: “Thank you very much, Mr. President. First of all, I feel awkward being here, and now you’re going to leave me all by myself.”

The two presidents decided on the spur of the moment to speak with reporters following a nearly 90-minute in the Oval Office. Reporters were notified less than 10 minutes before the show started.

Clinton endorsed Obama’s proposal to temporarily extend all the George W. Bush tax cuts, including those for the wealthiest Americans. While Democrats are protesting that last item, Clinton echoed Obama’s argument that the package also includes unemployment benefits and other tax breaks that benefit the middle class.

Both noted that Republicans will take over the U.S. House next month, and be in a position to dictate the terms of any revised deal.

“I think this is a much, much better agreement than would be reached were we to wait until January,” Clinton said “And I think it will have a much more positive impact on the economy — so for whatever it’s worth, that’s what I think.”

Obama chimed in,”that’s worth a lot!”

The two presidents also discussed how to deal with a Congress controlled by the other party, something Clinton experienced and which Obama will have to face starting next month.

After Clinton took a question on last month’s Democratic election defeats, Obama announced: “I’ve been keeping the First Lady waiting for about half an hour, so I’m going to take off …

Then the former president took questions on … what to do about private credit markets … Obama’s political standing … Democratic criticism of the tax cut deal …. Haiti … the budget deficit … and U.S. political divisions.

In the middle, came this question:

QUESTION: Mr. President, I get the feeling that you’re happier to be here commenting and giving advice than governing.

FORMER PRESIDENT CLINTON: Oh, I had quite a good time governing … (laughter) … I am happy to be here, I suppose, when the bullets that are fired are unlikely to hit me, unless they’re just ricocheting.

The Washington Post’s Dan Balz had this take on a remarkable news conference:

If not a transfer of power, the whole show seemed at least a temporary handoff. An embattled president, fresh off an electoral shellacking and struggling to sell a controversial tax deal to members of his own party, turned to a former president who, exactly 16 years ago, was struggling to right his own presidency after a defeat of almost similar magnitude.