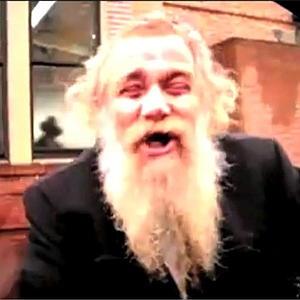 (Videos posted below) He may be funny, but talk-show host Jimmy Kimmel is no mensch.

Kimmel swiped a YouTube video of a ranting Hasidic man and spliced it into a skit to poke fun at hoops superstar LeBron James without permission, according to a suit filed yesterday in Brooklyn Supreme Court.

Dovid Sondik was featured in the YouTube video, titled the “Flying Rabbi,” which shows the Borough Park man raving in Yiddish in the street.

In August, “Jimmy Kimmel Live” grabbed snippets of that video to pretend its host was getting advice from the man.

“See, now it makes sense, LeBron went to Miami to become Jewish,” Kimmel joked as he set up the spoof.

“Apparently, [Pinto is] a very high-paid consultant when it comes to business matters. One time, I actually consulted with the rabbi myself.”

In the skit, Sondik is then seen hooting incoherently in Yiddish, framed to look as if he were talking to Kimmel through a car window.

The scene cuts back and forth between them and the bit ends with Kimmel joking, “You know, it turned out he was right.”

Sondik’s lawyer, Robert Tolchin, said the man was just “goofing around” when he made the video and never meant it to be broadcast to Kimmel’s 1.5 million viewers.

“It has caused me difficulty and pain,” said Sondik, who, though not a rabbi, would speak of scripture to people in the neighborhood. “Now they think I’m a joke, a comedian.”

A rep said Kimmel’s people were unaware of the suit.