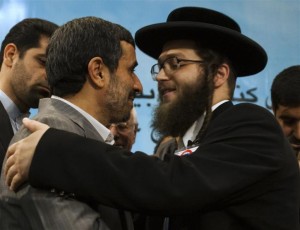 On Sunday both of them met with Iranian President Mahmoud Ahmadinejad.

Neturei Karta has a history of embracing the Holocaust-denying Ahmadinejad.

They made international headlines in 2006 when the group attended the Holocaust denying conference, held in Tehran, and have met him every time the Iranian Hitler – who has openly called for Israel to be wiped off the map – visited NYC for the U.N. General Assembly.

Iran’s president, who once described the Holocaust as a “myth,” hosted the 2006 conference meant to question the scale of the Nazi genocide of Jews — and whether it even happened.

Iranian President Mahmoud Ahmadinejad initiated the two-day Holocaust conference in Tehran, insisting its purpose was not to deny the Holocaust, but merely to discuss it in an “unrestricted atmosphere”.

Ahmadinejad has repeatedly expressed anti-Semitic opinions, said he didn’t believe in the well-documented genocide of millions of Jews during the Second World War and has repeatedly called for the state of Israel to be “wiped off the map.”