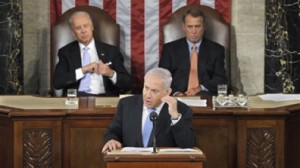 A protester screaming “equal rights for Palestinians!” interrupted Israeli Prime Minister Benjamin Netanyahu address to Congress Tuesday before being taken out of the House gallery by Capitol Police.

Some members of Congress – who offered Netanyahu what appeared to be a number of unified standing ovations throughout his speech – booed the protester.

Netanyahu responded to the protester by saying that “I take it as a badge of honor, and so should you, that in our free societies you can have protests.”

“You can’t have these protests in the farcical parliaments in Tehran or in Tripoli,” he continued. “This is real democracy.”

“So as we share the hopes of these young people throughout the Middle East and Iran that they’ll be able to do what that young woman just did – I think she’s young; I couldn’t see quite that far – we must also remember that those hopes could be snuffed out, as they were in Tehran in 1979,” Netanyahu added.