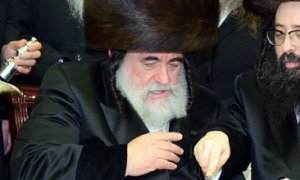 Thousands of chassidim waited on line Rosh Hashanah night to wish the rebbe a ‘gut yohr’. The atmosphere was electric as many chassidim from outside Eretz Yisrael and from areas outside of Bnei Brak arrived to spend yomtov with the rebbe.

During a tisch on Tuesday, the second day of Rosh Hashanah 5773, the rebbe delivered words of hisorarus, addressing smart phones and the danger posed by the phones. He stated the “Treif phones result in a spiritual Holocaust”.

“I am witness to hundreds of avreichim and heads of families who simply fell spiritually, beginning with their pasul phones” the rebbe stated. “At times, a person comes to me for advice or a bracha, and their treif phone is in his pocket. He comes to me with a bomb. Go home. I do not agree to accept kvitlach from one who has such a phone” the rebbe told the thousands present.