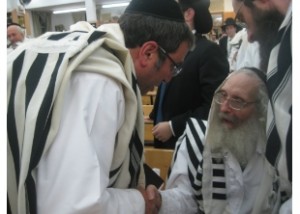 While the “Neilah” experience for most people is an important one, climaxing the entire Yom Kippur Avodah,; for Rabbonim it’s that much more.

For most people, though  uplifted and inspired by Neilah, I don’t believe that much thought goes into it, until it actually  happens. However Rabbonim knowing the importance of this Tefillah , think for days, some  for weeks, on how to find  just the right words to use to lift up the Olam after a whole day of Tefillah to just one more level of experiencing Kedushas Hayom. For myself, I spend the better part of the year with my eyes and ears wide open, looking for just the right Neilah inspirational story. This year, I found it several months ago, and it left me with a much deeper understanding of what Neilah is all about.

Here is my Neilah story.

Last Yom Kippur, a very prominent and popular Baal Chessed named Shloimie Gross (Z”L) decided to leave his home in Flatbush to  spend Yom Kippur davening in the famed Yeshivas Mir in Yerushalayim. Immediately after Maariv, Shlomie, who was a major supporter of the Mir was escorted up to the front of the large Bais Medrash to give and receive a warm Bracha from the Rosh Hayeshiva of Mir, Harav Nosson Tzvi Finkel (Z”TL). The Rosh Hayeshiva  gave his dear friend Shlomie a warm handshake and an even  warmer Brocha.  Someone from the Yeshiva administration got hold of a camera and took a picture of both the Rosh Yeshiva, Rav Nosson Tzvi and Shlomie still dressed in their Talis and Kittel with their magnificent smiles. (see attached picture).

It was just a few short weeks later, that the terrible news spread throughout the Torah world, the Rosh Hayeshiva of the largest yeshiva in the world had left this world. Over the next week, the magazines and newspapers were filled with stories and pictures of the Rosh Hayeshiva’s saintly life. One of the pictures printed, was the one with Rav Nosson Tzvi and Reb Shlomie, taken just a few weeks earlier on Motzai Yom Kippur.

When this picture was printed, a close friend of Reb Shlomie, Rav Binyomin Povarsky, Shlita (son of Rav Berel Povarsky, the Rosh Yeshiva of Ponovez) immediately faxed this picture to Reb Shlomie at his office in Flatbush and followed up a few moments later with a phone call. He said the following: “ Shlomie, can you imagine that not more than half an hour prior to this picture, unknown to anyone in this world, the Rosh Hayeshiva was nigzar by the Rebono Shel Olam, LAMISAH (for death)” and then his voice faded off.

The story picks up just a few short months later, when a great tragedy occurred that left hundreds of people shocked and bereft, on an Erev Shabbos, when  Reb Shlomie was stricken with a massive heart attack and he was niftar  suddenly.

A dear friend, Moshe Feuer, who is a mechutan with Reb Shlomie Gross (Z”L) shared with me the last part of the story. He, along with many relatives and friends flew to Eretz Yisroel after Shabbos to escort this special unforgettable Baal Chessed and Baal Tzedakah to his kevurah. In the van that picked up the family and drove them from the airport to Shamgar for the Hespedim and kevurah, Rav Povarsky painfully reminded them of the picture that he had sent Reb Shlomie months earlier and the comment that he made then  about the picture and then he added; “who could have ever imagined that the Gzar Din handed down in Shamayim just a half an hour before that picture was taken was that both these unique and special people would be leaving the world in the coming year of 5772.

When I heard this story and I saw this picture,that was my Neilah moment, though it happened months before Yom Kippur.

If we would truly grasp the significance of what takes place in Shamayim by Neilah, by the Chasimas Hadin, we would not only enter Neilah a little inspired, a little hungry and a lot tired, we would be shaken to the very core of our being. Klal Yisroel suffered so many losses this past year and the perspective we need to have is that everything that happened was decided and finalized at Neilah.

One Erev Yom Kippur, when the Telzer Rosh Yeshiva Rav Chaim Stein Z”TL was already in his 90’s, he was walking to the Yeshiva with his grandson. Having suffered a devastating loss several months earlier with the loss of his granddaughter Goldy(Z”L) he turned to his grandson and said, “ had I cried more last Yom Kipper when they read about the deaths of the sons of Ahron Hakohein, I could have prevented the Gezeira of Goldy’s death.” This was the depth of the Rosh Yeshiva’s understanding of what Yom Kipper is all about.

The Brisker Rov ZT”L used a Moshol  to describe the different attitudes to the Yemei Hadin. During the war, merchants would smuggle goods across the border illegally. The penalty for this crime was death. One would hire a wagon driver for a high fare to transport him and his merchandise to his destination. As they would get closer to the border, the merchant would start trembling from fear.  He knew the consequence in case he was caught. The wagon driver was nervous, but not as afraid since he merely faced a fine. The horses weren’t nervous at all. As far as they were concerned, it made no difference where they were.

We need to stand by Neilah like the wagon driver, with the clarity of thought and the depth of understanding that “Hiney Yom Hadin,” and we and our family and all of Klal Yisroel ‘s futures are in Hashem’s hands at that moment.  And if we can truly do it, then hopefully we will all be zoche for a year of health, Nachas, Parnosoh and all the Brachos that this  world has to offer.

(This author has received permission from the Finkel and Gross families to use their names and this picture. Any Chizuk or inspiration that hopefully will come from this article, should be a zechus for their holy Neshomos.)