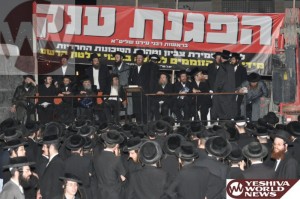 My letter is in regards to your article titled “Hoodlums Attack At Beit Shemesh’s Orot School“, published yesterday.

I am one of those parents who live in Bet Shemesh and sends my three girls to Orot Banot. Orot is a mamlachti dati torani school run by Shaalei Torah. The curriculum is comprised of limudei kodesh and general education. The Shaalei Torah organization has been a wonderful part of the Bet Shemesh community for over 20 years , focused on Torah education, kiruv, chesed and helping children at risk.

About our family. My wife and I made Aliyah to Israel in 1994. We are both products of the US Yeshiva day school education system. I am a graduate of Yeshiva University and of its post-graduate Chaver program, while my wife learned in Michlelet Orot, post high school. We have been living in the Sheinfeld neighborhood of Bet Shemesh since 1997. We B”H have five wonderful Israeli-born children, three girls in Orot Banot and two boys in the Shaalei Torah junior high school (both who are graduates of Orot Banim).

With the completion of the girls school this summer, the process started to move into the new building, which sits right next to the existing boys school campus. The new buildings were funded by the Education Ministry and were ear-marked for Orot by them as well as by the current and former Mayors of the city. The Orot Campus borders three national religious / traditional communities (Neria, Aviv and Sheinfeld) and also borders one Ultra Orthodox community (much of which is currently under construction). Our communities are comprised of many Olim from the US and other western countries, as well as many families who grew up in Israel, in general, and Bet Shemesh, in particular.

Unfortunately, recent events regarding the opening of the girls’ school as has been reported in the domestic Israeli press are quite accurate (national newspapers, radio and television). Our girls and spouses are enduring, on a daily basis, curses, spitting, egg and tomato throwing by so-called zealots, who believe that their actions are Torah sanctioned.  I’ve attached a link to video footage that was taken just today near the school at the site that many girls walk to in order to pick-up their bus home – [ALL VIDEOS POSTED BELOW]. I could have never in my wildest dreams imagined that fellow Jews can act that way to innocent 6-12 year old girls. No reason justifies the terror that these so-called zealots are inflicting on our children.

We were horrified as a community that so-called leading rabbis participated in  a rally aimed at supporting the zealots in their evil quest. I attach a photo that I took on Tuesday night (I took a big risk getting in that close, at their rally). Those who were on the stage are listed below in Hebrew.

There are those who claim that these rabbis were not aware of who they were supporting. The sad truth of the matter is that there is absolutely no way they could not know who they were supporting. What further is distressing to our community is that the local and national ultra-orthodox leadership and press is silent, while our children are being terrorized. One would think that during the month of Elul, as we approach Rosh Hashanah and Yom Kippur, that the Charedi establishment would care, would be shouting STOP THE TERROR. But all we have is silence or public displays of support. As an anecdote, one of the men yelling in the YouTube clip at our girls is  the son of one of those rabbis on the stage.

I would urge everyone to be very careful to whom they are giving charity to in Israel, as the money may be landing in the hands of terrorists or, just as worse, those who are silently supporting them by not taking a stand.

Best wishes for a Shanah Tovah to all of Am Yisrael.