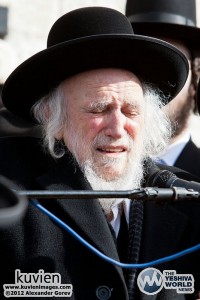 The funeral proceeded by foot to the Sanhedria Cemetery, where he was buried next to his father, HaRav Yechezkel Michel Tucazinsky. The rav is succeeded by his children, Rabbi Tzvi Aryeh, Rabbi Shmuel, Rabbi Yitzchak and Rabbi Yosef, as well as many grandchildren, great grandchildren and great-great grandchildren. May his memory be for a blessing.

Rav Nissan Aharon attended Etz Chaim until age 14, when he left home to study at the Lomza Yeshiva in Petach Tikvah. There, he became exceptionally close with the mashgiach, Rav Yechezkel Levenstein, ztz”l. After Rav Yerucham Levovitz was niftar, and Rav Yechezkel Levenstein was appointed the new Mirrer mashgiach, he asked his prize talmid, Rav Nissan Aharon to accompany him to Poland and remain there to study in the yeshiva. Instead, Rav Nissan Aharon stayed in Eretz Yisrael, where Rav Isser Zalman Metzger appointed him to head Etz Chaim, Jerusalem, a position that he kept for close to seventy years.

In addition to taking a close, personal interest with each of the hundreds of students studying at the various Etz Chaim institutes, and personally overseeing every member of the staff, Rav Nissan Aharon authored the sefer, Ir HaKodesh V’Hamikdash, published his great-grandfather, Rav Shmuel Salant’s, manuscripts and updated and published the very popular Luach Eretz Yisrael.

Rav Nissan Aharon traveled throughout the world, a modern day maggid, for close to fifty years. Although he never requested a donation, he kept the mosdos running and distributed huge sums of money to tzedaka. For himself, he never took more than a regular melamed’s salary, and his simple two room house, without any luxuries — not even a bath tub! — is a living testimony to his yashrus.

Rav Tucazinsky was extremely excited about the planned Etz Chaim campus, which is to be built on the site of the old Lemmel School on Yeshayahu Street. The Lemmel School was founded in 1856 by Frankal, who had been sent by members of the Austrian reform movement to provide the children of Jerusalem with a secular non-religious education. At first he disguised his true intentions, as in the words of Rav Ben Tzion Adler, “He kissed the mezuzah when he entered, and he kissed it again when he left. He wore 2 pairs of Tefillin and there was a huge ‘shvisi Hashem’ sign behind his desk, but the rabbonim realized that it was all a bluff.” The Lemmel school had what appeared to be unlimited funds, and, at the time, many assumed that religious community would dwindle, until eventually it would disappear in favor of the “enlightenment.” Today, things have come full circle and work will soon begin to convert the Lemmel School into a makom Torah.