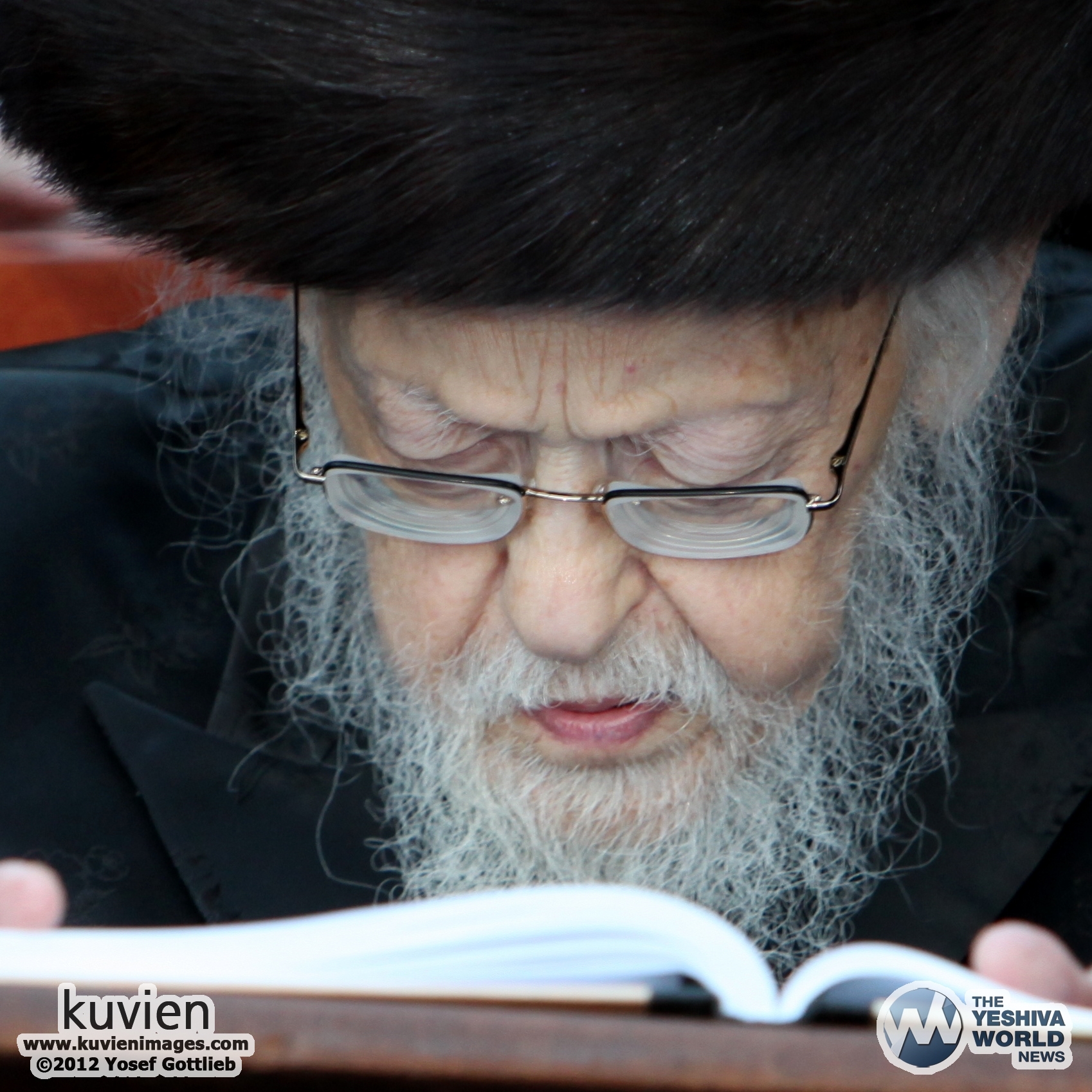 The verdict was given and Am Yisrael is compelled to accept the decree, that Maran Posek HaDor HaGaon HaRav Yosef Sholom Elyashiv ZATZAL has been called by the Heavenly Court. The news was released to the tzibur just a few moments ago.

The Gadol HaDor has been hospitalized for 6 months, since the eve of 14 Shevat 5772, and had been placed on a respirator.

During the day the tzibur began to understand the severity of the situation and yeshivos began reciting tehillim, leading to tefilos and tehillim as the Kosel and around the world. Nevertheless, the gadol hador has been summoned to the Olam HaEmmes.

Rav Elyashiv, the leader of Torah Jewry, upon whose frail shoulders rested the most intricate of Halachic decisions and rulings was niftar a short time ago in Jerusalem’s Shaare Zedek Medical Center, surrounded by family members and rabbonim who were close to the posek hador.

Rav Elyashiv was born according to most records on April 10, 1910, a maternal grandson of Mekubal Rav Shlomo Elyashiv, known as the Leshem. His father was Rav Avraham Elyashiv, chief rabbi of Homel, and his mother was Chaya Musha. The posek hador was an only child, born to his parents after 17 years of marriage.

Interestingly, the shidduch for the rav was arranged by Israel’s first chief rabbi, HaRav Yitzchak HaCohen Kook zt”l, and the rav was married to the daughter of the Tzaddik of Yerushalayim, Sheina Chaya Levine, a daughter of Rav Aryeh Levine zt”l in 1929. They had five sons and seven daughters.

One son died of an illness at a young age. His daughters all married prominent Rabbinic scholars.

The second, Sarah, is the wife of the late Rav Yisroel Yosef Yisroelson, head of the “Bar Shaul” Kollel in Rechovot.

The third, Ettil, is the wife of Rabbi Elchanan Berlin, Rabbi of the “Achvah” shul.

The fifth, Leah, is the wife of Rav Azriel Aurbach, the son of Rabbi Shlomo Zalman Auerbach.

The sixth, Gitel, is married to Rabbi Binyamin Rimmer, Rosh yeshiva at the Tshebiner Yeshiva in Jerusalem and at the Kiryat Melech Yeshiva in Bnei Brak.

A seventh daughter, Rivkah, was tragically killed by Jordanian shelling in 1948.

As a young man, the rav served as a dayan on the Chief Rabbinate Supreme Court, resigning in 1972. That was his last position connected to a state institution.

After HaGaon HaRav Shach ZT”L was niftar, Rav Elyashiv assumed the mantle of leadership as the Manhig and Posek HaDador. The rav’s more popular seforim include “Kovetz Teshuvos” and “Divrei Aggadah”. His Halachic rulings have impacted the generation, and are the guiding light for many issues that were yet uncharted territory in a modern high tech world that presented questions demanding his unique expertise, his profound grasp and understanding of Torah and Halacha, the nigla and nistar, that only he possessed, along with the Siyata Dishmaya that enabled him to serve Am Yisrael for so many decades.

Those around the rav report that his rigorous daily schedule of davening and learning rarely changed, and this left a mere 4-6 hours daily for sleeping and other matters. Despite his advanced age and illness, the rav continued responding to Halachic inquiries from rabbonim around the world, even giving shiurim and maintaining his position as the leader of world Jewry. He never passed up the opportunity to be a sandek when conditions permitted, even in his last weeks, in a significantly weakened state, he would not pass up this cherished mitzvah.

As is the way of gedolim in Eretz Yisrael, the rav maintained a modest lifestyle to put it mildly, far removed from the comforts of this physical world. He lived in his humble home at 10 Chanan Street in Meah Shearim, and this is where he met with leading rabbonim from around the world who sought his advice on Halacha and hashkafa matters.

Am Yisrael is in mourning, a palpable numbness as the news of the petira of the manhig hador resonates around the globe. Details surrounding the levaya will be announced as they become available.