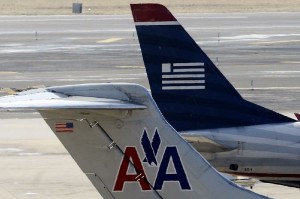 If you use miles to get a free ticket on American Airlines, you may have to pay to check that suitcase.

American and US Airways announced changes Tuesday to their policies on checked-bag fees and redeeming miles for free flights.

Passengers traveling on American on miles they earned or who paid full price for an economy seat won’t get free checked bags anymore. Some elite-level frequent fliers on both airlines will get one less free bag than before.

When it comes to redeeming miles for free flights, US Airways is ending blackout days. American will change the number of miles to get an unrestricted free flight – more on popular travel days, fewer on less-busy ones. And it’s making an array of changes to the miles needed for international trips.

Suzanne Rubin, an American Airlines vice president who oversees the AAdvantage loyalty program, said the changes will increase revenue but she declined to give a figure.

The two carriers merged in December and formed American Airlines Group Inc., and Tuesday’s changes are designed to bring the policies of the two closer together. Between them, they have 110 million loyalty-program members, Rubin said.

– Mid-tier elite members (platinum on American; gold and platinum on US Airways) will get two free checked bags; a reduction of one for the US Airways’ Dividend Miles elites.

– Lower-level elites (gold on American; silver on US Airways) will get one free checked bag, a reduction from two for the American customers.

– Removing a charge for second checked bags on trips to South America.

Rubin said the company was not considering charging a fee for carry-on bags, as Spirit Airlines does.