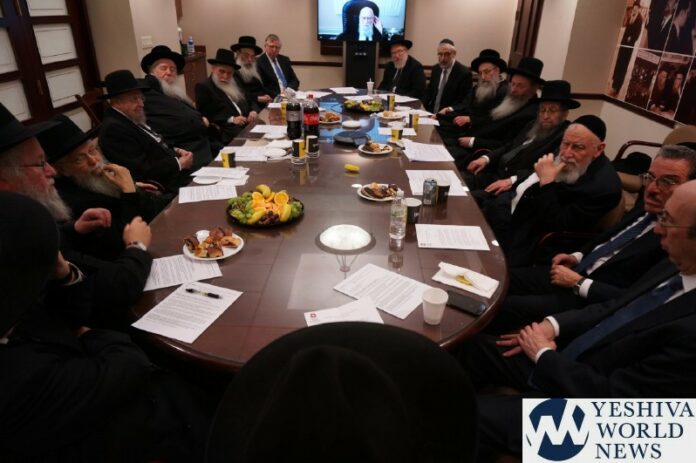 It is a sad reality that very often, lawyers win cases not on the evidence per se, but rather upon their ability to speak more passionately and more convincingly than the lawyer representing the other side.

Recently, a Rav of a Flatbush shul delivered a deeply passionate resignation speech.  Listening to the speech strikes an emotional cord within us.  It was a plea for Tefilah, a plea to hear the sweet sounds of tinokos shel bais Raban. What yid with a heart listening to this powerful presentation would not empathize with this Rav? Who cannot be taken by his passion? His genuine pain?  The power of an emotional speech is most convincing.

The problem is that the Rav’s appeal to the emotion, so powerful and so prevailing, leads us, perhaps, down a somewhat murky path.  It is a path that, intellectually, perhaps, sets off some warning bells in our head.  And yet, the sheer force of his passion, his earnestness of expression, his sincerity – draws us ever closer toward his thinking.  Is he, perhaps, right?

It is hard to navigate – but there is something tugging within us.  Something we feel is not quite right.  Why does his speech set off warning bells?

Because, we are the am Hashem, and we like to think that we cannot simply throw our Gedolim under the bus.

Everyone knows that the Sar haTorah – Rav Chaim Kanievsky shlita paskened not to daven in shuls.  Should we listen to this Rav and view Rav Chaim as being misled by baal habatim that know nothing of Torah and Yiddishkeit?  And what of Rav Gershon Edelstein Shlita?  The warning bells are a bit too scary to also throw Rav Edelstein under the bus.

Rav Meir Stern shlita has also closed every minyan.  His depth and gadlus and yiras shamayim are beyond reproach.  Is it wise to really take on such Gedolim?  There were numerous Admorim and Chassidisha Rabbonim who also self-isolated.  Indeed, the Novaminsker Rebbe himself zatzal came out strongly in not attending minyanim in shuls.

Also, Rav Yeruchem Olshin Shlita – has been davening on his porch (b’minyan) for weeks and has not been in the shuls.  His seforim in learning and in mussar and machshavah have been described by the greatest Gedolim as a matanah for this dor.  How do we throw his hanhaga to the wind?

And, finally, let’s not so easily dismiss the intelligence and love for Klal Yisroel of the entire Moetzes Gedolei Torah.  To describe Rav Dovid Feinstein and Rav Shmuel Kamenetsky, the einei hador as too old is very very disturbing.  In this Rav’s worldview, we never should have closed the shuls or the chadarim.  The way he expresses it – the doctors do not know any more than he does. This also sets off warning bells.  Doctors are more experienced than we are.  The frum pediatricians just do not seem the type to hate the shuls and wish to close them.

Another warning bell is the accusation levelled toward Agudath Israel of America that there was forgery in issuing their guidelines of how to gradually re-enter our shuls.  To accuse hundreds of well-meaning doctors who give their days and nights in selfless dedication and care for our friends and relatives who have died is just untenable.

Yet another warning light is the possible Motzei Shem Rah on a Yeshiva graduate who is working in Washington.  Casting a slur of not putting on Tefillin upon this young man, merely because he arranged a phone call with the White House that convinced Rabbonim to shut the shuls,  is a bit disturbing.  Who knows how many people listening to the Rav’s tape now believe this assertion?

The laws of our Torah are inviolable.  Even if you are the Vilna Gaon or Moshe Rabbeinu, you cannot violate halacha and randomly accuse someone that you do not even know.

Another warning bell, is this attack on those who wish to minimize talking in shul.

The Shulchan Aruch (OC 151:1) rules that it is forbidden to talk during shul – and one must avoid idle talk in shul even not during tefilah.  The Tosfos Yom Tov even wrote an entire mishebayrach for those who avoid it – how can a Rav come out against Shulchan Aruch?  The Aruch haShulchan (OC 124:11) writes that talking in shul is a chillul Hashem because it contributes to the perception that haovdei koachavim yoser zahirim mildaber bebais tiflus shelahem m’klal Yisroel bemikdash me’at shelanu.  With the utmost respect, by what right can one voice opinions that are counter to Shulchan Aruch and a cause of chillul hashem?  True, the Rav’s father is on the Moetzes Gedolei Torah, but that does not give anyone the right to so thoroughly negate the views of virtually all of Moetzes.  I have been told that the Rav’s words were misconstrued, but at least fulfill the idea of “Chachomim hizharu b’divreichem” if this is the case.

Also, how can one go against so many Gedolei Torah who quote the mefurash Gemorah in Bava Kamma (60b) –  dever ba’ir kanes raglecha – if a plague is in the city – keep your feet indoors?  The pasuk that the Gemorah quotes in Shmos (12:22) explicity states: “Do not leave the entrance of your homes.”

The Ramah in the Darchei Moshe (116:5) says that even though it says not to leave the home – running away is still preferable.  It does not say that the zchus of keeping the minyanim running will save us.

Someone had actually remarked to me that the death rate of COVID-19 does not rise to the level of Dever ba’ir.  I cannot believe that any one that truly values life would say such a thing.  The death rate locally is about .45%.  There has been too much pain and suffering to dignify this with a response.

The Rav has a remarkable ko’ach hadibbur. He is also clearly passionate about what we all hold dear.  But even if one disagrees with these Gedolim, Roshei Yeshiva, Admorim, and Rabbonim, and the doctors’ opinions as well – let’s not accuse them of rishus.   Let us not throw around the word “stupid” so loosely.  Divrei chachomim b’nachas nishmayin.  It would seem, that a heart-felt and sincere apology is in order.

[An earlier version of this article incorrectly stated that some of the aforementioned Gedolim did not daven b’minyan, when in fact, they just did not daven within the shuls.  The author regrets the error.]