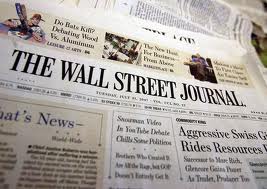 An Op-Ed appeared recently  in the Wall Street Journal by Rabbi Shmuly Yanklowitz that can only be described as a terrible blurring of lines.  Rabbi Yanklowitz was explaining why he, as an Orthodox Rabbi, will no longer be eating Kosher meat because, as it is currently produced, the animals are raised on the very same animal-rights-abusing farms as non-kosher meats are raised.

This article is not about government (or for that matter Rabbinic) oversight on the way animals are treated at farms across America, however correct that call may be. This article is about something else.

It is about the Wall Street Journal misrepresenting the author of their Op-Ed as an orthodox Rabbi.

Popular though he is, an analysis of Rabbi Shmuly Yanklowitz’s literary oeuvre will demonstrate that he cannot at all be described as following the views of Orthodox Judaism.  His writings, from a theological perspective, are not by any means orthodox.

Rabbi Shmuly Yanklowitz’s writings on Mashiach being a Christian concept that influenced Judaism, and other writings of his, clearly place him far outside the orbit of Orthodox Judaism.  The following quotes are from an article he had published in the Jewish Week, February 1, 2012.

“At the end of the day, I would like to suggest that we are Moshiach—we are the ones we have been waiting for.”

This article is a flat-out denial of a cardinal principle of Judaism – the arrival and anticipation of Moshiach.   He has written that the identity of the much waited for Messiah is “us.”  This flies in the face of the Talmud, Maimonides and thousands of years of Jewish tradition.

It is disingenuous for Rabbi Shmuly Yanklowitz to claim that he is Orthodox and deny fundamentals of Judaism.

In a Tisha B’Av reflection, this past Tisha B’Av, Rabbi Yanklowitz actually denies the rebuilding of the third Beis HaMikdash.  Below are some quotes and the link.

“The fantasy of returning to one centralized monolithic form of Judaism is not only wishful thinking. It’s also dismissive of two of the most important aspects of modern Jewish life: diversity and adaptability.”

These articles and more have placed Rabbi Shmuly Yanklowitz far outside the orbit of Orthodox Judaism.  The “I’m okay, your okay” attitude cannot stretch the boundaries of the umbrella of orthodoxy to include someone who denies the meaning of the idea of Moshiach and of rebuilding the Beis HaMikdash.

This is not a matter of misinterpretation, he really writes and believes this.   The very Tefilos of our synagogues, our Shmoneh Esreh, indeed, even of the last line in the counting of the Omer would have to be thrown out in order to comport with Rabbi Shmuly’s theological writings.

It is particularly sad, because it is clear that Rabbi Shmuly is a man with remarkable sensitivities.  His work in Haiti, in improving conditions for prisoners, in calling for greater transparency in charitable organization, all point to a lofty soul.  His concern for social welfare, for immigrant rights, for the downtrodden and weak; indeed, his concern for others, all others – are all very important and admirable qualities.

And while it is true that Rabbi Shmuly Yanklowitz had once received semicha from Rabbis who themselves had graduated from Orthodox institutions, that does not make someone an orthodox Rabbi.  There is obfuscation going on here, of the highest order.  The obfuscation involves not only this Rabbi, but an entire group of others, presenting their ideas that lie far beyond the pale of orthodoxy, as if they are orthodox.

Rabbi Zev Farber, a leading Open Orthodox thinker, has taken the position that Sefer Dvarim was not written by Moshe Rabbeinu and came significantly later.  This is not and cannot comport with the theological views of the Talmud, the Shulchan Aruch, and Orthodox Judaism.  [See HERE for example, and HERE for starters.

…It is impossible to regard the accounts of mass Exodus from Egypt, the wilderness experience or the coordinated, swift and complete conquest of the entire land of Canaan under Joshua as historical. The popular idea that the Torah’s holiness stems only from the historicity of its claims, dictated by the mouth of G-d, strikes me as an attempt to depict the Almighty as a news reporter.”

It is painful to write this, because we do want to include as many people as possible within the umbrella of Torah true Judaism.  However, in light of the above, presenting Open Orthodoxy as part of Orthodoxy is just plain not honest.

The Wall Street Journal should issue a clarification.