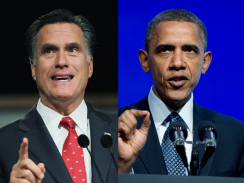 All registered voters are asked: “Suppose the presidential election were held today, and it included Barack Obama and Joe Biden as the Democratic Party’s candidates and Mitt Romney and Paul Ryan as the Republican Party’s candidates. Who would you vote for Barack Obama and Joe Biden, the Democrats (or) Mitt Romney and Paul Ryan, the Republicans?” Those who are undecided are further asked if they lean more toward Obama and Biden or Romney and Ryan and their leanings are incorporated into the results.

These results are for likely voters, who are the respondents Gallup deems most likely to vote based on their responses to a series of questions asking about current voting intentions, thought given to the election, and past voting behavior. Each seven-day rolling average is based on telephone interviews with approximately 2,700 likely voters.