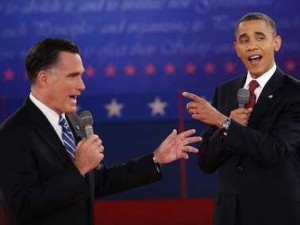 Phillip Tricolla doesn’t think either presidential candidate adequately answered his question about what can be done about rising gasoline prices, but he says he wasn’t expecting much at the candidates’ second debate.

Some of the questioners said they were now leaning in one direction or another, although at least one said she would await the outcome of the final confrontation next week on foreign policy before making up her mind.

Jeremy Epstein, a 20-year-old Adelphi University student studying exercise science and communications, led off the night’s questions, asking the candidates for reassurance that he will find meaningful employment after graduation. He said Wednesday he still considers himself uncommitted but would vote for Obama if the election were held today.

“Gov. Romney went into a discussion about manufacturing jobs,” Epstein said. “I don’t think people in college like me are looking for that kind of job right now.”

He admitted he was in awe when Obama looked directly at him. “I felt like he was saying he wanted a bright future for me, that he was talking about the youth of America.”

Epstein said he was looking forward to the final debate and could ultimately change his mind. “I think they both articulated themselves eloquently. They did the best they could.”

Mary Follano, a respiratory therapist and registered Republican, hasn’t made up her mind either. She asked Romney about his tax plans and how it would affect middle-class voters like her.

“They both expressed a desire to protect the middle class. I guess the difference is on how they would treat the wealthy. That seems to be the difference,” said the divorced mother of adult children. She said Romney’s discussion of capping deductions seemed to her like he was using arbitrary figures. “Arbitrary does not seem like a plan,” she said, “not a clear plan.”

She also was dubious of Romney’s stance on capital gains taxes.

Follano, 54, also expressed concerns about Obama’s plans to raise tax rates for those making $250,000 or more. She said that if small businesses were negatively impacted by such a move, it could impact employment. “There’s got to be ways to tweak these things,” she said. “I don’t see a problem bringing rates back to the way they were during the Clinton administration. I don’t recall any rich people having any hardships back then.”

Nina Gonzalez, a Democrat who voted for Obama in 2008, said the debate still leaves her in the undecided camp. “If Gov. Romney could actually provide the jobs, that would be a good thing because we really need them,” said the 57-year-old psychotherapist who asked the candidates about their views on the assault weapons ban.

“I just find President Obama so polished. I feel more confident with him. He seems to have more insight into the world,” Gonzalez said. “Gov. Romney is a very good businessperson. I just wish he could give us a plan that regular citizens can really believe in. If you’re that good a businessman, you need to clearly and precisely say how you’re going to solve the problem.”