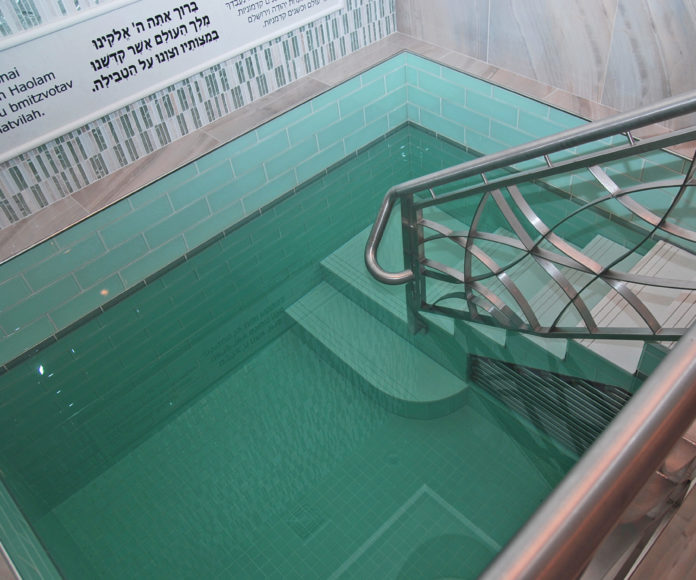 The name struck fear among the British army during World War II. Indeed, it struck such fear rgar supposedly a directive was issued throughout the British Army. The directive allegedly stated that no one was permitted to say Rommel’s name alone.

Although the story is apocryphal, it exists for good reason.

Soon, the Nazis seized Greece. Then Cyprus. Then Crete. Now, Rommel threatened Eretz Yisroel itself from North Africa. The Italians had even bombed Tel Aviv.
And now, at the end of 1942, the battle of El Aleiman is about to transpire. It appears that Rommel will win. He is undefeatable.

What can be done?

In other words, Hashem will protect the land in the merit of our keenly observing these three Mitzvos – kosher slaughter, the laws of carrying on Shabbos, and the proper observance of Mikvah.

THE REBBES SPRING TO ACTION

In light of the Baal Shem Tov’s interpretation, a group of Chassidic Rebbes springs into action. They assemble in Yerushalayim, and pledge to build Mikvaos. All over the land of Eretz Yisroel.
The apparent result?

THE LAWS OF MIKVAH BUILDING

Clearly, it pays to be very careful in the laws of Mikvah. It also pays to familiarize ourselves with the issues behind building Mikvaos, and some contemporary controversies.

We know, of course, that a Mikvah may not have water that is considered to have been drawn by human hands. We also know that a Mikvah should be as clean and attractive as possible. The trick is to be able to accomplish both of these requirements, and to do them well.

HOW MOST MIKVAOS WERE BUILT

Historically, the way most Mikvaos were built, was as follows: The pool of rainwater called the bor was built next to the actual immersing pool. A small hole was made connecting the two pools on the sidewall. This hole can be opened and closed, and the Mikvah may be cleaned when the hole is closed, temporarily invalidating the Mikvah. After the immersion pool is filled again, the hole may be opened and once again there is a kosher Mikvah. The halacha requires that the hole be equivalent in size to a Shfoferes HaNod, the opening of a container. In this manner of Mikvah construction the bor and the Mikvah are side by side.

Rabbi Shalom Dov Ber Schneerson (1860-1920) zatzal, the fifth Lubavitcher Rebbe (known as the Rashab), preferred a different method of Mikvah construction. In his notes on Mikvah construction cited at the end of “Taharas HaMayim”, he advocated three major changes:

1] He wanted the immersion pool to be on top of the rainwater pool.

2] He advocated that the hole size be much larger than a Shfoferes HaNod – he wanted it to be a full handbreadth by a handbreadth.

3] He advocated having two holes, and not just one.

PERHAPS TO ADDRESS THE RAAVAD

The reason for change number one is possibly because he felt that this position addressed the halachic view of the Raavad more adequately. The Raavad held that the pool of rainwater becomes invalid once it no longer contains a majority of its original rainwater. Perhaps the Rashab felt that the waters would not exchange if it was constructed in this manner . Although the Raavad’s position is a minority position, it is worthwhile to attempt to fulfill the Mitzvah of Mikvah according to as many opinions as possible (Tashbatz Vol I #17).

Alternatively, the Rashab might have advocated this type of Mikvah as a protective measure to ensure that no one even accidentally invalidate the Mikvah, by having a slab placed above the actual bor.

As far as the other two changes, there may be a number of benefits. The Shach (YD 201:112) rules that, ideally, the opinion of Rabbeinu Yerucham should be followed, and that the rainwater pool should be open to the immersion pool during the time of immersion. At times, the person in charge of the Mikvah may forget to open the hole during the immersions. Having two holes, and large ones at that, ensures that this opinion of Rabbeinu Yerucham be followed.

At other times, the water in the immersion pool may actually be too low and it may escape notice. Utilizing the Mikvah on top of the Bor method, there is no chance of this type of error.

THE SATMAR REBBE TOO

The Rashab was not the only one to build such a Mikvah. In a letter dated 1936, the Satmar Rebbe zatzal discusses an occasion when he built an immersion pool on top of the rainwater pool. He also advocated having a number of holes, and to make them larger than a Shfoferes haNod. The Satmar Rebbe had a fourth requirement. He wanted the concrete slab in between to be constructed from a number of pieces so that it would not be too heavy to lift. He advocated that each slab have its own hole.

Having the immersion pool on top has met with some controversy, however. Rabbi Meir Posen of London in a monograph he sent to Dayan Weiss zatzal of Jerusalem (cited in Minchas Yitzchok Vol. V #95) quotes the Divrei Chaim (2:88) as ruling that a Mikvah on top of a bor is invalid and constitutes something called k’tafres. The Mishna in Taharos (8:9) states: K’tafres aino chibbur lo letumah velo letaharah – a ktafres is not considered a connection neither to make impure nor to purify. A k’tafres is liquid streaming down from an angle.

However, such luminaries as Rav Meir Arik zatzal (Imrei Yosher Vol. II #167 ), Rav Moshe Feinstein ztazal (Igros Moshe YD Vol. III #65), the Satmar Rebbe zatzal (Divrei Yoel Vol. I YD #80), and Dayan Weiss zatzal disagree with Rabbi Meir Posen’s contention and stated that the Divrei Chaim never invalidated it on these grounds if there was a direct hole above the rainwater pool. Indeed, Rav Meir Arik even questions the supposition that it would be invalid if it came down from an angled tube.

“NO MIXING” AND FLUID DYNAMICS

The notion that there is no mixing, however, does not have scientific validity. There are two methods in which fluids mix with each other. There is diffusion and convection. We will first discuss diffusion. Although often the immersion pool is heated, we will work with a supposition of both bodies of water being at a constant temperature. The equation is x= the square root of (d*t). In this equation x is the amount of centimeters, d represents the diffusion co-efficient of water at room temperature, and t represents time in seconds. In our case, d = .00001 square centimeters per second. One can perhaps posit that although the waters do mix through diffusion, since the timing is rather slow, and it is barely detectable, perhaps according to the Raavad, it is still halachically considered as if the waters did not mix.

The waters, however, can and do also mix through convection. They do so by five orders of magnitude above general diffusion. There are three types of convection that would cause the waters to intermingle: 1] heat gradient, 2] general swirling, and 3] gravity gradient.

Convection mixing happens 10,000 times as quickly as general diffusion. As the Satmar Rebbe points out, the general swirling that will most assuredly be brought about by immersing in the immersion pool above would cause a quick exchange almost instantly. Thus it is highly unlikely that there is anything gained in this method of attempting to fulfill the Raavad’s opinion, as it has not been fulfilled.

Clearly, the only advantage of the Rashab’s suggestions lies in ensuring that the Mikvah does not get invalidated. Nowadays, however, these concerns are a bit remote. Our Mikvaos enjoy supervision by knowledgeable Rabbis, and the caretakers are G-d fearing individuals who are well trained.

Rav Moshe Feinstein, zatzal however, did have an alternative suggestion that could address the Raavad’s issue. As many people know, there are basically three ways in which Mikvah water can still be halachically considered as not having been drawn.

A] Hashaka- where the immersion pool, literally “kisses” or makes contact with the rain water through an open hole.

B] Zriyah, where a bor of rain water is filled with drawn water and it spills over into the immersion pool.

C] Hamshacha, where the drawn water is led across the ground and into the immersion pool that already has at least 20 seah of rainwater.

Rav Moshe Feinstein (YD Vol. I #111) suggested that, if the cost is not prohibitive, a Mikvah with two boros could be built – one utilizing the system of hashaka, and one utilizing the system of zriyah. Although the Chazon Ish did not agree that anything could be gained with the two Boros system, Rav Moshe disagreed. He felt that one could fulfill the Raavad’s requirement with this method.

As an interesting footnote to this whole discussion, 75,000 Jews in World War II Hungary were saved because of this position of the Raavad.

In 1944, over 100,000 Jews were crammed into the ghetto of Budapest. At this time, all the Jewish charity institutions in Budapest were ordered to be shut down by the government. Only the Jewish council, which the Nazis deemed necessary was to remain. An askan, Maurice Lowinger (the same one who has many Torah institutions in the Five Towns/ Far Rockaway area named after him) who ran the soup kitchen – worked out an agreement that the soup kitchen would continue as part of the Jewish council.

Maurice Lowinger’s father-in-law, the original founder of the soup kitchen, had the foresight to order the biggest pots that could possibly be manufactured.

Aside from its material possessions -the soup kitchen needed four things: Water, raw food stuff, oil, and wood. The first three of these items were nearly impossible to get hold of. The soup kitchen had to cook 500 gallons of soup per day. To achieve this, 1,250 gallons of water were necessary. This was a huge obstacle as the Nazis had cut off all water to the Jewish ghettos.

How did Mr. Lowinger get the water?

Let’s review again. Most opinions hold that once there is a Mikvah of kosher water, an unlimited amount of drawn water may be added to the Mikvah. The Raavad, as mentioned earlier, disagrees. In the Raavad’s opinion the majority of a Mikvah’s water must always be from an undrawn source. Practically, the only way to have a Mikvah according to the Raavad is if the Mikvah is fed by an underground spring.

Although long forgotten, there was once a Mikvah in Budapest that was fed by an underground spring. It was on account of the fact that Jews were scrupulous in Mikva to build it according to the Raavad, that the Jews of Budapest were saved.

Somehow, Maurice Lowinger was able to get engineers to find and drill into the water source of this long forgotten Mikvah. Remarkably, the plan worked. Soon, Maurice Lowinger’s soup kitchen had water. And plenty of it. The Jews of Budapest, for the time, were saved, thanks to the Raavad.