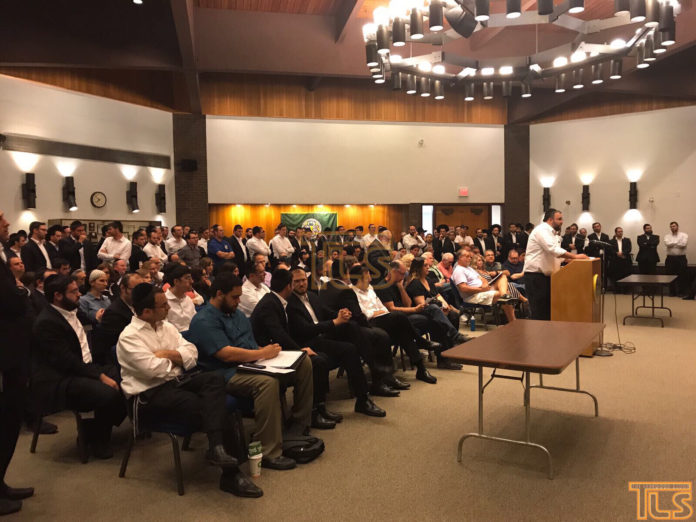 The Jackson Township on Tuesday night passed an ordinance that would make it illegal to place an Eruv on Township right of ways. Hundreds of Frum Jackson residents packed the auditorium to make their voices heard against the ordinance, which passed unanimously.

Rabbi Avi Schnall, the State Director for Agudath Israel in New Jersey, says he is disturbed by this ordinance.

“We are disturbed by this development, but hopeful that the council members will follow through in the commitments they made tonight to continue dialogue and that there are possibilities of amending this ordinance,” Rabbi Schnall told TLS.

Earlier this year, the Township passed an ordinance that would ban schools and dormitories in the town – another apparent move to keep out Orthodox Jews. A lawsuit was filed against the Township and is still ongoing.

One Frum man spoke at the meeting and made his voice be heard that he is against any Eruv being built “at this time”. Below is a video of the man speaking:

In July, the township began enforcing an ordinance whose stated purpose is to keep Jackson’s streets clear of obstructions, which includes hockey nets or basketball hoops.

Mayor Michael Reina defended the township’s decision to enforce the ordinance, which critics pointed out came suspiciously close to the filing of a request from Orthodox Jews to build an Eruv.

Read what CentralJersey.com had to say:

Reina said any assertions that the township’s enforcement of the obstruction ordinance had anything to do with religion was “bogus.” He said all of Jackson’s ordinances are enforced equally.

“They are barking up the wrong tree, we embrace all religions,” he said.

Reina said there have been more calls about portable basketball hoops being placed in Jackson’s streets than anything else.

According to the mayor, 350 violations of the obstruction ordinances were issued in July. He said the ordinance is not new, but he said the number of complaints is rising.

Last month, Rabbi Schnall cried foul at the decision to enforce the ordinance, linking it to the application for the Eruv.

“This just continues the pattern of Jackson ordinances that are popping up against the Orthodox community.” said Rabbi Schnall. “This is a very, very obvious move. For decades, people have had basketball hoops in front of their houses and no one was ever bothered.”

“The fact that they took this ordinance and decided to start enforcing it seems a little bit suspicious,” he said.