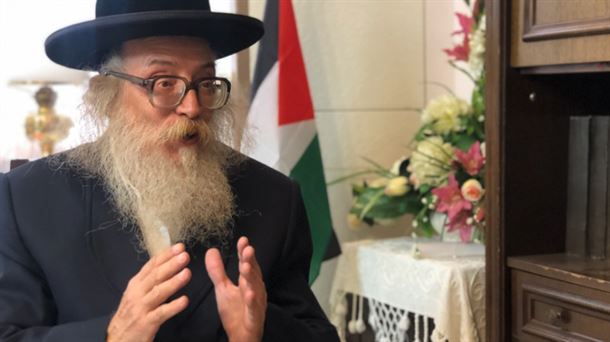 One of the heads of the Neturei Karta, Yisroel Meir Hirsch, published a video last week during the rocket attacks on Israel that raised the ire of hundreds of thousands of Israelis. While the Palestinians were launching rockets at Israel and millions of people were huddled in bomb shelters, Hirsch said that the entire land of Israel belongs solely to the Palestinians and that he wishes the speedy “nullification of the Zionist-terrorist-regime. The lands, which are all Palestinian, should be returned to the nation of Palestine.” Towards the end of the video, he said: “The world should serve Allah under one name.”

The video which Hirsch said in Hebrew, was broadcast by Palestinian media channels and had English subtitles on it for those who don’t understand Hebrew.

Hirsch opened by saying: “To our brothers and friends, the Palestinian people, who are under the continuing occupation, under the boots of the Zionist occupation, and to all those who search for peace among the nations throughout the world. We, the authentic Palestinian Jews who represent the Jewish nation in Palestine and throughout the entire world, wish to express our unequivocal opposition to the Zionist State and to the brutal crimes of the occupation.”

“We hereby declare that there is no such solution as the Two-State Solution. The entire land of Palestine belongs to the Palestinian people only. They are the legitimate owners of all of Palestine, and the Zionists have no right to any piece of the land, not even a centimeter.

“We also wish to clarify here that the position of J-Street and such like-minded organizations do not represent the Jewish people and are certainly not benefiting the Palestinian people. The entirety of their position is a lie and a diversion tactic against those who seek peace and justice, as they promote a false discourse of rights which totally rejects the basic rights of Palestinians.

“They talk about strengthening the democracy of the Zionist State during a time when Zionist is based solely on a complete dictatorship and the complete negation of the basic human rights of the Palestinian people who are under a violent and cruel occupation without an ounce of democracy that is accepted in the rest of the world.”

“Their entire goal is to maintain a demographic Zionist majority in the land in conjunction with an apartheid rule that is based on the racial theory of Zionism, in what they refer to as the State of Israel.

“We hope and yearn for the abolishment of the Zionist regime of terror, for the return of all Palestinian refugees to the homes and their historical lands so that we may all live in peace and brotherhood just as we lived with our Palestinian brethren before the rise of the Zionist monstrosity, and that the entire world should worship Allah with one voice. Inshallah!”