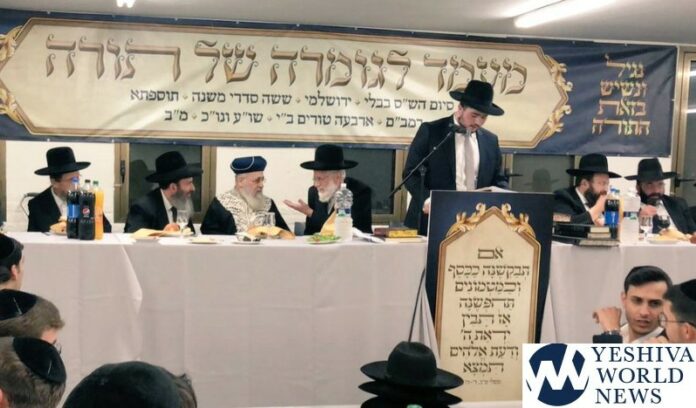 It is hard to say what constitutes the entire wealth of Torah, but a 19-year-old yeshiva bochur from Yeshivat Nachlas Dovid in Petach Tikvah made a siyum on Tuesday night on the following corpus of Torah literature: Shas both Bavli and Yerushalmi, Mishnah, All of the Tosefta, all of the Rambam’s writings, Arba Turim, the Shulchan Aruch with all of the commentaries, and the Mishna Berurah.

The students, Avraham Yakir Malka, presided over a special siyum in the main hall of the Yeshiva that was organized by his family. Chief Sephardic Rabbi, Hgaon HaRav Yitzchak Yosef, spoke at the event as did the head of the Charedi community in Petach Tikvah HaRav Moshe Nachshoni as well as other Rabbonim and Roshei Yeshiva from the vicinity who attended the event.

Malka is the grandson of HaRav Yeshua Shimon Chaim Ovadia who was the Chief Rabbi of the city of Sefrou in Morocco and the author of the Sefer Shailos U’teshuvos Yismach Leivav.

According to a report in BeChadrei Charedim, Malka has previously finished Shas Bavli 4 times, the first time while he was only in grade school.