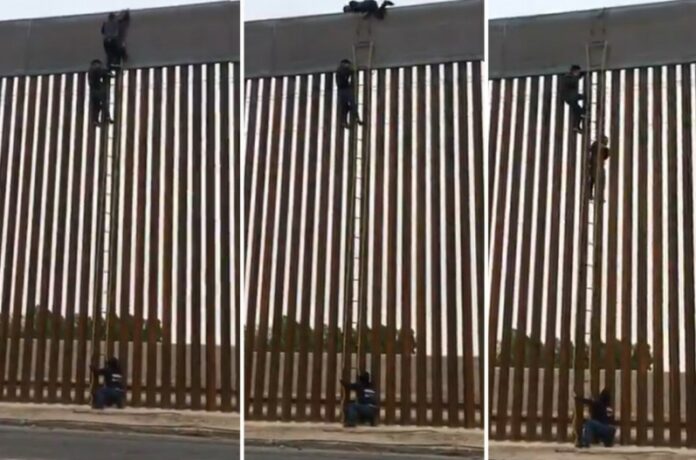 Footage has emerged of a migrant brazenly climbing over Donald Trump’s new of US-Mexico border wall.

It comes just weeks after the US president bragged his wall as “virtually impenetrable” during a trip to the exact same $150 Million stretch of the barrier in California.

The first quickly climbs up and over before effortlessly sliding down one of the vertical poles.

He then sprints a short distance to a second, lower wall which he easily pulls himself over and vanishes.

Within seconds a US Border Patrol truck arrives to investigate.

At this point the others decide to bail, pulling down the rope ladder and making off on the Mexican side.

The clip emerged on social media on Tuesday and is said to show the breach at Otay Mesa, near San Diego.

The barrier was part of a recently approved $150 Million, 14-mile section of new fencing.

The metal barriers are 18 feet and 30 feet high at various points, and guarded by cameras and motion sensors.

In September Trump visited the same stretch of the wall and told reporters it was “an amazing project” and “virtually impenetrable”.

He boasted: “This wall, you won’t be able to touch it. You can fry an egg on that wall – it’s very very hot.

“There’s not a lot of water out here.”

SHOCK VIDEO: This is reportedly Trump's new wall on the Mexico border.