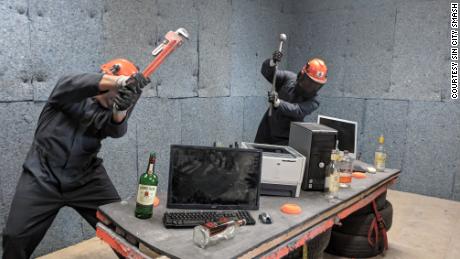 They are the latest “rage” in entertainment, so to speak.  Instead of “escape rooms,” indoor skiing, or axe-throwing venues, people are now paying money to enter a room with safety gear and baseball bats – and smashing and breaking things.   They are called “rage rooms” and they are available in different packages.

You can buy a package where you smash high end electronic equipment, computer equipment, fax machines, printers, etc.  A cheaper package will give you plates, glass-ware and low quality art-work.

The question is – what does Halacha say about all of this?

The short answer is that it seems to be strictly forbidden.  One might as well take a date to a Heritage Pork-Tasting Menu in Riverhead and try out the Red Wine Cured Pork Jowl with Honey Crisp Apple, or the Pork Belly in Celery and Sesame Broth with Shitake Mushrooms, or the Pork Loin with Pickled Beets.

The Gemorah in Shabbos 105b states, “Kol Hameshaber kailim b’chamaso k’ilu oved avodah zara – one who breaks vessels in his anger – it is as if he is worshipping idols.”

The Gemorah in Yevamos 96b goes even further.  It seems that there was an argument in a certain shul in Tveriah that ultimately ended in the Sefer Torah being torn.  Rabbi Yossi Ben Kisma was present and remarked, I would be very surprised if there was no Avodah Zarah in that shul.  They searched and apparently there was some Avodah Zara there.

There is a third source, (Avos DeRabi Nosson 3) wherein Rabbi Akiva remarks that whomsoever stomps his bread on the land, and whomsoever throws out his money in anger does not leave this world without needing to receive charity from others.

Now while it is true that Rav Ovadiah Yoseph zt”l understood this Gemorah in Shabbos as an exaggeration (YO OC Vol. I 28:9), there is no doubt that chazal found it terribly wrong and deeply offensive.

One could argue that the Gemorah says that it is only prohibited if one does it in anger.  Perhaps it is different Poskim say that even if one does not do it in anger, but just rips or destroys them – is still in violation of the prohibition (see Mivchar HaPninim p. 241)

Rabbeinu Yonah in his Shaarei Teshuvah (3:82) explains that there is a double violation in this.  The first is the wanton destruction and violation of bal tashchis – destroying things, and the second is that he is allowing and giving opportunity and expression to his evil inclination dominion over his actions which will violate the Torah.  There is also a view that there is a possible third prohibition – Darchei Emory – following the ways of Ovdei Avodah Zara.

The prohibition of Bal Tashchis is the wasteful destruction of trees and the like. The prohibition is found in Dvarim 20:19.  Although the verses refer to a wartime situation, the Ramban explains that after you defeat the enemy, you will be able to utilize them.  That being the case, the halacha is extrapolated from these verses that all types of wasting is forbidden. This is the ruling of the Rambam (Malachim 6:10) – that it applies to all forms of waste and destruction.  The Baal haTanya in his Hilchos Shmiras HaGuf v’Nefesh also understands that the Torah prohibition is across the board and is not just limited to fruit trees.

The Netziv writes in his commentary on Chumash that the reason is that whatever is necessary to benefit mankind is forbidden to destroy.  On the contrary, one must seek to benefit from it.

Most authorities, however, are of the opinion that destruction of items other than fruit trees are of Rabbinic origin (See Sefer haChinuch Mitzvah 530).  So at least according to these authorities, it is not exactly equivalent to the pork tasting – but one does get the picture.

It is interesting to note that the author of the Shulchan Aruch did not devote a section to this area of halacha.

WHAT IF THE ITEMS ARE OWNERLESS?

It seems that there is a debate among the Rishonim whether the prohibition of Bal Tashchis applies to items that are ownerless.  In Responsa Yehudah Yaaleh (YD #164), the Mahari Assad cites a debate between the Rosh and Rashi who are lenient versus the Rambam, the RaN and Tosfos who hold it is a prohibition.

WHEN BREAKING THINGS IS PERMITTED ON A LIMITED BASIS

There are times when the notion of breaking something is permitted.  We do find leniencies in the Talmud where some forms of smashing are permitted in order to assert a healthy respect and fear.  Also, we find that some form of smashing is permitted to ascertain the midos of a child and to see whether more specific instruction is necessary in midos.

The Maharsha (Shabbos) writes specifically that one may only do so with pre-broken items.  Also, there are two other caveats that are presented.  One should make sure that people do not learn from him to get angry (Meiri) , and one should take extraordinary care not to allow such actions to affect his temperament (Yeshuos Chochma).

BUT DOESN’T IT RELIEVE TENSION?

One could possibly put forth the argument that when there is a purpose to breaking something – perhaps this does not fit into the Gemorah that forbids it.  Don’t we find that we smash a glass at a chuppah and a plate at a t’naim?

This argument is specifically rebuffed by the quote of this Gemorah, according to Rav Yonasan Shteif in chadashim gam yeshainim and by sefer Yichusei Tanaim v’amoraim page 313.

WHEN AN ALTERNATIVE EXISTS

The Chikrei Lev (Mahadurah Basra YD 11 “shuv ra’isi) writes that when an alternative choice exists – then it is entirely forbidden to accomplish it through the medium of breaking a vessel.  The Orech Meisharim 19:6 writes this as well.  The newly printed Ritva (also on Shabbos) cites the same qualification.

In short, if one is planning to go to one of these during Chanukah vacation, winter vacation, or just a plain date – don’t – it is at least a debate among the Rishonim.  Change your plans instead.