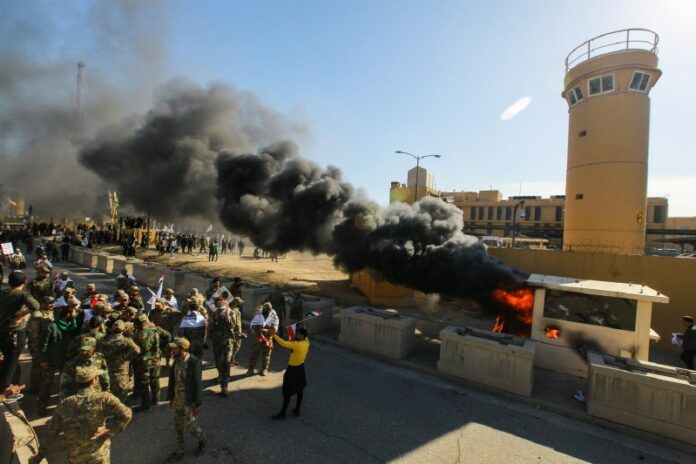 Thousands of rioters and Iran-backed militia fighters stormed the United States embassy in Baghdad on Tuesday in protest of the US airstrikes in Iraq and Syria on Sunday against Kata’ib Hezbollah, a pro-Iranian Shi’ite terror group allied with Hezbollah.

US Ambassador to Iraq Matthew Tueller and his staff were safely evacuated from the embassy but according to the Washington Post, US diplomats and soldiers are trapped inside the embassy with Iraqi security forces protecting them from rioters.

Iraqi security forces reportedly did nothing to stop the rioters from marching to the fortified Green Zone, where the US embassy is located, allowing them to pass through a security checkpoint to enter the area. Later, the government sent special security forces to prevent the rioters from actually entering the embassy building but the rioters managed to break down the main door and set the front reception area and a guard tower on fire.

Iraqi security forces sprayed teargas at the rioters and witnesses said that shots were fired as well.

Senior Shi’ite officials, including Qais al-Khazali, the leader of the Iranian-backed Asa’ib Ahl al-Haq militia, who is one of the most senior Shi’ite militia leaders in Iraq, participated in the protests.

“Americans are unwanted in Iraq,” Khazali told Reuters. “They are a source of evil and we want them to leave.”

US President Donald Trump tweeted that “Iran is orchestrating an attack on the US embassy in Iraq. They will be held fully responsible. In addition, we expect Iraq to use its forces to protect the embassy and so notified!”

Iran killed an American contractor, wounding many. We strongly responded, and always will. Now Iran is orchestrating an attack on the U.S. Embassy in Iraq. They will be held fully responsible. In addition, we expect Iraq to use its forces to protect the Embassy, and so notified!

A Jerusalem Post report said that Iran is using the US airstrikes on Sunday as an opportunity to use its Iraqi proxies to push the US out of Iraq.

The US strikes were carried out following a barrage of over 30 rockets fired on the K1 Iraqi military base in Kirkuk in northern Baghdad on Friday. The strikes killed an American civilian contractor and four US military service members as well as Iraqi security forces.

“KH has a strong linkage with Iran’s Quds Force and has repeatedly received lethal aid and other support from Iran that it has used to attack” coalition forces.”

PMF supporters are at the main gate of the US embassy in Baghdad trying to storm it, Iraqi Forces trying to push them back pic.twitter.com/AE1ODLtD5c

Our latest on the storming of the gates of US embassy Baghdad, with an eyewitness account by the great @Mustafa_salimb https://t.co/SgWVTEfOig