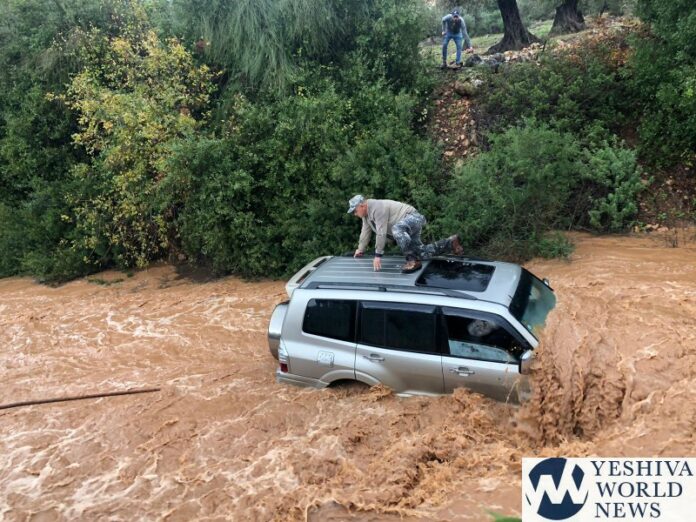 Heavy rain began falling overnight in Israel’s north and by Wednesday afternoon, there was heavy flooding in several cities and snow accumulating in Ramat Hagolan.

A 32-year old resident of Nahariya drowned on Wednesday afternoon when he was swept away by a stream of water as he was trying to rescue a mother and daughter who were trapped in a flood. His body was located after several hours by a rescue unit. His neighbor said: “A tragic drowning that to my knowledge has never occurred in Nahariya.”

Earlier on Wednesday afternoon in Nahariya, two cars were caught in a heavy stream of water, with one car flipping over, when the Ga’aton river which bisects the city overflowed its banks due to the torrential rain. Police rescued the three occupants of the car that flipped over, none of whom were injured.

Following a chaotic early morning in Nahariya, which is Israel’s most northern coastal city, during which 15 children had to be rescued from a flooded kindergarten, the municipality closed all schools in the city and asked parents to pick their children up. Residents were asked to stay inside and not venture out onto the streets due to the heavy flooding. So many people were trapped in floods that the IDF sent trucks to rescue residents. Numerous tractors were also dispatched to rescued trapped residents.

Many streets in the city were closed due to flooding and by early afternoon, all entrances to the city were blocked. The public was requested not to enter the area due to the flooding and heavy traffic due to blocked roads. There were numerous traffic jams on intercity highways in the northern region by late afternoon on Wednesday.

In Haifa, 50 mm (two inches) of rain fell within two hours on Wednesday morning. Fire and Rescue Services were summoned to rescue the children of the Seret-Viznitz Talmud Torah in Haifa after huge amounts of rain poured into the building. The rabbeim were forced to bring dozens of children to upper levels of the building. The children were b’H, safely brought outside the building and all students were sent home.

By noon on Wednesday, copious amounts of rain and hail had flooded the entire metropolitan area of Haifa. The Fire and Rescue Services hotline (102) had received numerous calls of people stuck in private cars, homes and businesses. Another school was flooded in Kiryat Bialik (on the outskirts of Haifa) but luckily no one was trapped inside. Israeli Police closed a number of the main streets to traffic in Haifa and the surrounding areas

Israel Railways announced that train service north of Haifa has been discontinued for the time being due to flooding of the train tracks in several areas.

One Haifa resident told B’Chadrei Chareidim what the city looks like: “It’s mamash like seeing a waterfall flowing in the middle of the street – it’s simply unbelievable.”

The city of Tzfat also received torrential rain, and streams of water rushed down the city’s characteristic narrow stairways.

Heavy snow fell in Ramat Hagolan and by mid-morning as the snowfall increased, the Golan Regional councils closed all schools in the area and sent the children home by bus.

Strong winds blew in Israel’s center and south and rain began to fall in the late afternoon and is predicted to continue into the evening. According to weather forecasts, the storm will continue until Shabbos but the strong winds will weaken on Friday.