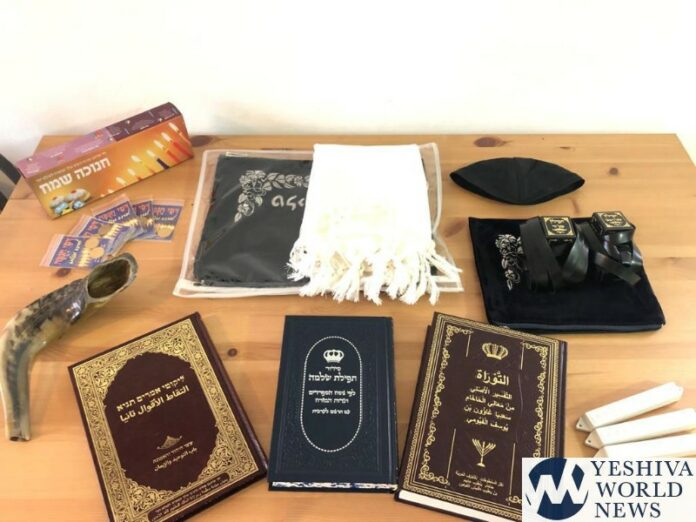 A parcel containing Matzos, Tefillin, a Tallis, Sefarim, and Mezuzas were sent by Yad L’Achim to a Jewish man living in an enemy state. The operation was carried out via a third country that would receive a package from Israel and could also send packages to the enemy state. The Jewish man in question relayed in a letter to Yad L’Achim that he wanted other Jewish children in the country to see him act like a Jew and perform the mitzvos like a Jew.

Yad L’Achim’s Heritage Department issued a statement on Tuesday that said: “We are receiving more requests from Jews living in Arab states that are requesting aid in the form of shiurim, seforim and other Jewish belongings that would help them keep the mitzvos.”

The department set for itself a goal to reach all of the Jews still living in Arab countries or in third or fourth world countries and to enable them to keep their heritage so as to avoid cases of intermarriage. “The aid we provide them manifests itself in different ways and we provide help only after we have ratified that they are indeed Jewish by way of the experts who work with us and assist with the bureaucracy and Halachik questions involved. We assist Jews living in Libya, Yemen, Jordan, Iraq, Egypt, and Lebanon, among others.”

This week, one of the people whom the department has been working with over the past few months and conducting regular chevrusas with, requested to receive tashmishei kedusha. It took some doing but the organization managed to find a way to get them shipped to the man so that they would arrive by him in the next few weeks.

The Jewish materials were sent to a European country and will be received by a member of the organization there. As the European country has diplomatic and trade relations with the Arab country in question, the Jewish items will be sent from there to the destination country.