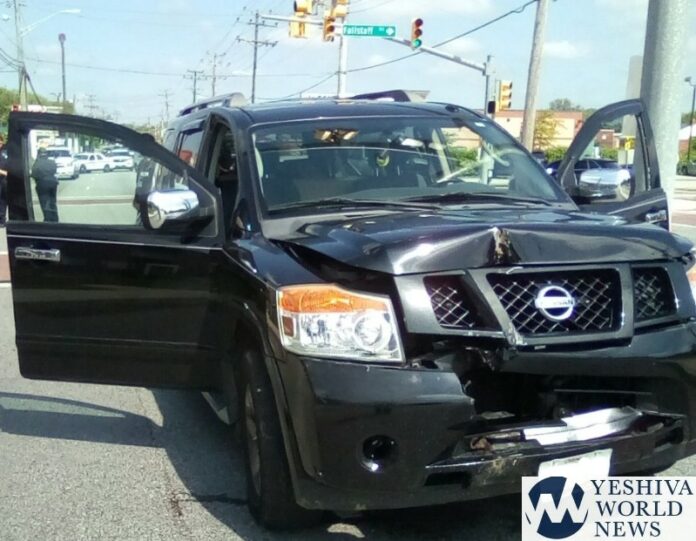 The Baltimore Police Department is investigating a disturbing incident that occurred on Tuesday morning on Yeshiva Lane, when a man attempted to run over a senior staff member at Yeshiva Ner Yisroel with a vehicle.

Sources tell YWN that at around 7:45AM, a staff member had just gotten into his car outside the Yeshiva, when a man deliberately rammed his vehicle into his car. The man managed to get out of his car and run inside the Yeshiva building. The suspect then continued his rampage, driving at a high-rate of speed and began chasing another senior staff member of the high school with his vehicle. Eyewitnesses say that he missed striking him by inches, as the suspect drove at a high rate of speed.

Police responded in seconds, and managed to apprehend him and take him into custody.

Detectives are investigating the incident, and are not ruling out any motive. The identity of the suspect has not been released by Police, but sources confirm to YWN that he is a former student, and the man he chased is Rabbi Simcha Cook, principal/Menahel of the high school

THE FOLLOWING UPDATE WAS GIVEN TO YWN BY BALTIMORE POLICE:

Baltimore County Police received a 911 call around 7 a.m. today for a person driving erratically in the 400 block of Mt. Wilson Lane, around the campus of Ner Israel Rabbinical College. The caller stated that the driver was trying to run people over and gave the tag and a description of the vehicle, a black Nissan.

As officers were en route, they spotted the vehicle at Mt. Wilson Lane and Reisterstown Road. They attempted to stop the vehicle and it fled southbound on Reisterstown Road. After a brief pursuit, the vehicle was stopped at Reisterstown and Fallstaff roads. The suspect would not comply with orders to get out of the vehicle so officers broke the driver’s side window in order to arrest the suspect. During the arrest one officer sustained an injury and was transported to R Adams Cowley Shock Trauma as a precaution.

The suspect has been arrested. Additional details will follow once formal charges are placed.