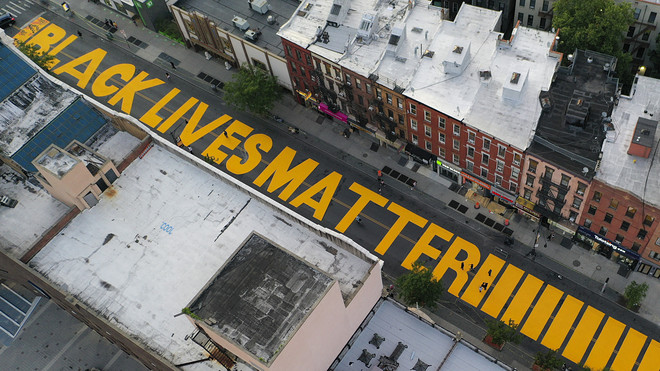 President Donald Trump criticized Mayor Bill DeBlasio Wednesday over the $1 billion NYPD funding cut, yet he says DeBlasio will use the money for a Black Lives Matter street “sign” in New York City.

Trump showed his disapproval of the situation on Twitter by calling it “symbol of hate”.

DeBlasio spoke about the plan in an interview with MSNBC on Wednesday, saying he intends to have the words painted on the street where Trump Tower sits.

Trump said that would amount to “denigrating this luxury Avenue” and would “further antagonize” the police.

….horrible BLM chant, “Pigs In A Blanket, Fry ‘Em Like Bacon”. Maybe our GREAT Police, who have been neutralized and scorned by a mayor who hates & disrespects them, won’t let this symbol of hate be affixed to New York’s greatest street. Spend this money fighting crime instead!

De Blasio responded in a tweet showing his support for the Black Lives Matter movement.

You also don’t know that NY’s Finest are now a majority people of color. They already know Black Lives Matter.

There is no “symbol of hate” here. Just a commitment to truth.

Only in your mind could an affirmation of people’s value be a scary thing.