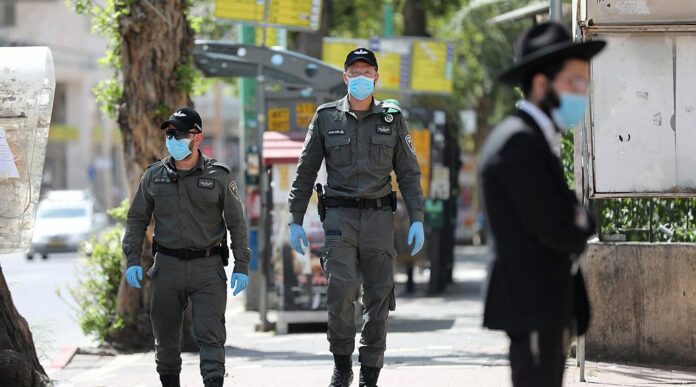 Social media is exploding in Israel the past 24 hours, over the massive police crackdown enforcing the wearing of masks. Not wearing a mask can cost you a person a 500 Shekel ticket. But local residents are claiming that Police are stalking the Chareidi communities and giving an abundance of tickets, while irreligious people are given warnings and free passes.

Whatever the case is, people are on edge, and walking around filming every incident, looking to catch the double standard by the Police.

It began with viral video of two policemen who stopped a 13.5-year-old Chareidi girl on Rechov Sarei Yisrael in Jerusalem, who according to witness reports, was wearing a mask but moved it off her mouth for a minute to drink something in the hot afternoon sun.

One of the witnesses said when one of the policemen saw that passerby were videoing the incident, he went to his police car and removed his nametag and threw in the car. At that moment, the policemen pounced on her and began writing out a fine for not wearing a mask. The girl burst out crying but the policemen paid no attention to her.

Meanwhile, just a few blocks away, dozens of liberal Israelis were protesting freely outside the Prime Ministers Residence in Jerusalem, with virtually no one wearing masks – as Police just sat in their cars and did nothing.

On Wednesday morning, police arrested a man at the Zichron Moshe Steeblach in Yerushalayim for not wearing a mask.

Police were out in force in Bnei Brak on Wednesday stopping people and issuing fines to anyone not wearing a mask.

The Police officer in the next video was writing out tickets for people not wearing masks – when he HIMSELF wasn’t wearing one!

Another officer was writing out 500 Shekel fines for not wearing masks, when his own mask wasn’t covering his nose.

But if you’re not Chareidi, police just give you a warning…..

Here is another Police officer seen walking with another man, both of whom had their masks around their necks. When confronted and asked for his badge number, the officer ignored him and kept walking. Ordinary citizens would be issued a fine for the way they were wearing their masks.