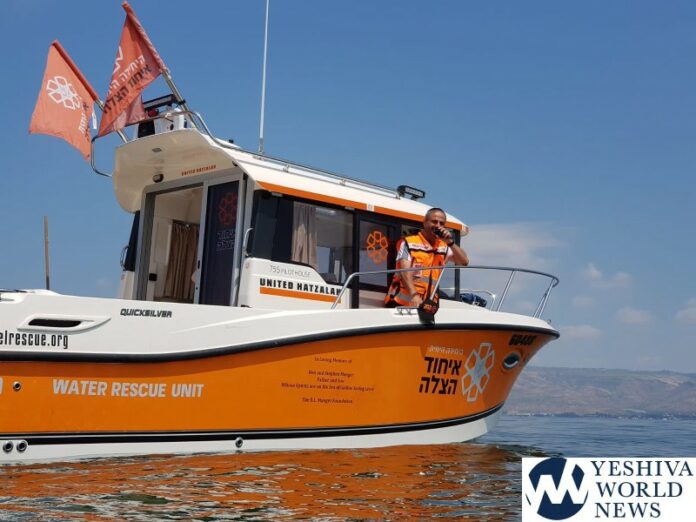 A Chareidi man was saved from drowning on Thursday afternoon on the Kinneret after he was pulled from the water by United Hatzalah’s rescue boat. The boat which patrols the western side of the Kinneret surrounding Tiveria on a daily basis during the swimming season works in conjunction with the maritime police on the sea to rescue swimmers who are often dragged into the middle of the lake by a strong undertow.

On Thursday afternoon Yossi Vaknin, head of the Tiveria chapter of United Hatzalah and skipper of the rescue boat noticed a floating ring that was spinning some distance away from the shore. “I saw the flotation device spinning and I steered the rescue boat in that direction. We arrived at the flotation ring a few moments later and found an older Chareidi man at the end of his strength, struggling to stay above the surface of the water. We initiated water rescue procedures of approaching a person in the water and we pulled him on board the boat. The man was at the end of his strength and almost sank even while we attempted to rescue him. This was a very close call and I am happy that it ended with the man being saved rather than an underwater recovery operation.”

Last year, United Hatzalah’s boat was called to more than 140 instances of people needing assistance on the water. Among those, were 9 drowning victims.