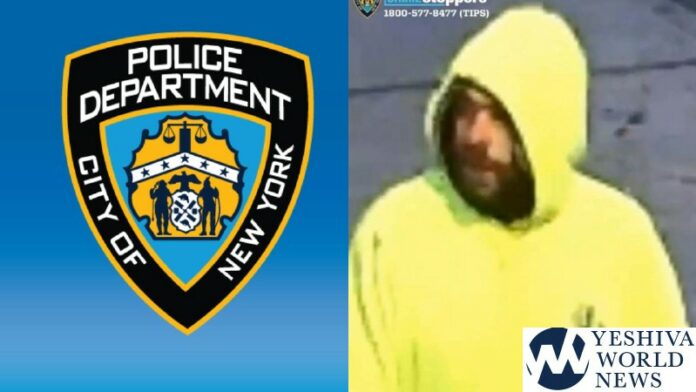 The NYPD is asking the public’s assistance identifying the following individual depicted in the attached surveillance video and photo regarding an assault that occurred in Willliamsburg.

The NYPD tells YWN that at round 6:00AM on Tuesday, August 25th, a 46-year-old female victim was walking at the southwest corner of Division Avenue and Rodney Street, when an unknown individual approached from behind, picked up the victim and slammed her onto the sidewalk. The individual knelt beside her and repeatedly punched the victim in the face and body. The individual attempted to take the victim’s pants off as she was dazed laying on the sidewalk, before fleeing the scene on foot on Division Avenue towards Keap Street. The victim sustained severe head and body trauma, EMS responded to the location and transported her to Brooklyn Hospital were she is in a medically induced coma.

The suspect is described as an adult male, light complexion, with a full beard. He was last seen wearing a yellow hooded sweatshirt, dark colored pants and red sneakers.

Surveillance video, taken from the incident, is attached.

Anyone with information in regard to this incident is asked to call the NYPD’s Crime Stoppers Hotline at 1-800-577-TIPS (8477) or for Spanish, 1-888-57-PISTA (74782). The public can also submit their tips by logging onto the Crime Stoppers website at WWW.NYPDCRIMESTOPPERS.COM, or on Twitter @NYPDTips.