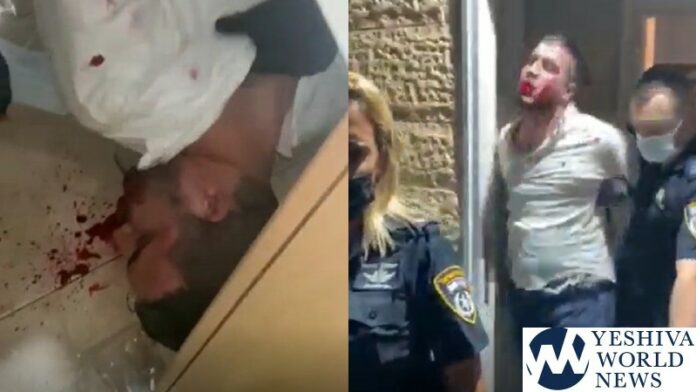 On Wednesday night, police officers and border police officers carried out a sting operation in a home in the town of Givat Ze’ev after they were told by neighbors that dozens of people were congregating inside and were breaking the Health Ministry Regulations.

In videos that have surfaced from the incident, a grown man is seen lying on the ground bloodied and being held down by the police. Another man was also seen to be bleeding due to a severe cut caused by broken glass. Family members were screaming and shouting at the officers, “Look what you have done to him.”

As more images surfaced it became clear that the incident was a private wedding that was taking place in someone’s backyard.

The border police officers brought in their weapons and the officers acted as if they were entering the scene of a terror attack, something which has brought a lot of critique in the eyes of the public. “The officers used extreme and violent action even in front of children who were present at the scene,” said one of the attendees tolt BChadrei Charedim in an interview that was held shortly after the incident.

A spokesperson for the police said that “Officers responded to an incident that involved a large number of people breaking Corona regulations at a private home in Givat Ze’ev. The officers who arrived asked them to disperse. During this, a number of those present at the home began to surround the officers and prevented them from carrying out their orders. One suspect has been held for questioning after he stuck his tongue out at an officer who was writing a 5,000 NIS ticket to the homeowner for the violation of Corona regulations. The suspect began throwing glass bottles, bottles of oil, and plates, at the officers. One officer was injured when he slipped on the oil and was cut by the glass.

It was additionally reported that one of the people injured in the incident was the son of the homeowner.

79 people contracted COVID-19 in the past week in Givat Ze’ev.

AUDIO BELOW IS THE BROTHER OF THE KALLAH BEING INTERVIEWED ON RADIO KOL CHAI AFTER THE INCIDENT: