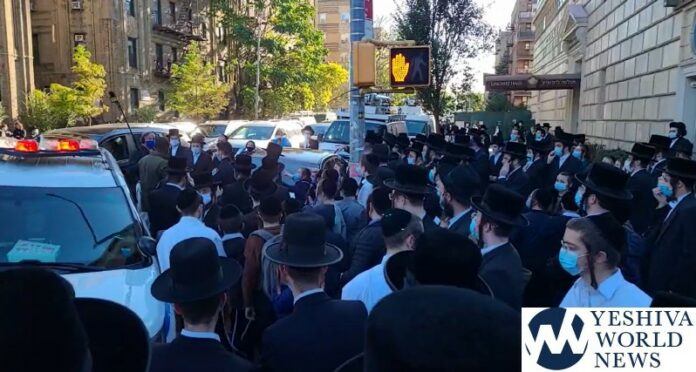 A chaotic situation unfolded on Wednesday afternoon, as the media showed up to a prominent Yeshiva which they thought was open.

Multiple news outlets were outside the building with cameras hoping to catch children exiting at dismissal. YWN has no knowledge if this Yeshiva was even open today.

Meanwhile, a massive group of angry local residents – including dozens of children – began screaming at the reporters to leave the community and stop targeting them. Nearly all of them were wearing masks.

A video by BoroPark24 captured the scene, as children yelled “NAZI” and “ANTI-SEMITE” and other obscenities at the reporters. Instead of capturing footage of children in a yeshiva against the Governor’s executive order, the media was given plenty of footage of the crowd yelling at them.

Eventually, Heshy Tischler showed up on the scene, making his first major appearance since his arrest on Motzei Simchas Torah.

Eventually, the NYPD arrived and made the reporters leave out of fear that a riot would break out.

Watch the scene in the videos below: