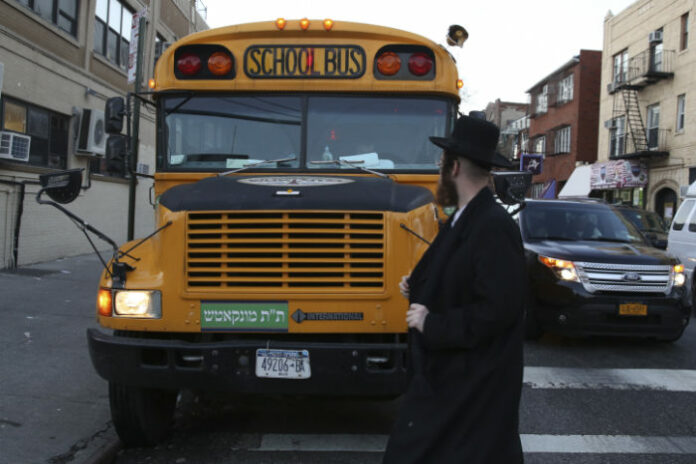 New York state will withhold funding from local governments that fail to enforce closures and social distancing in “red zone” hotspots, as well as from schools in those hotspots that refuse to shutter, Gov. Andrew Cuomo said Wednesday.

“Ramapo, Spring Valley, Orange, Rockland, we need real enforcement,” Cuomo said. “I can’t do what I did on bars and restaurants and take it over.”

Cuomo specifically cited yeshivas still open and religious gatherings still taking place in violation of the rules imposed last week in six small geographic areas where there have been spikes in coronavirus cases.

“If schools are operating it’s easy enough to find out,” Cuomo said, citing two recent news reports about yeshivas operating despite restrictions imposed last week. “The schools that have been identified as violating the closure order, they will be served today with a notice mandating they close and we are withholding funding from those schools.”

“I guarantee if a yeshiva gets closed down and they’re not going to get state funding you will see compliance.”

Officials in New York City, Orange County, Rockland County, the Town of Ramapo and the Village of Spring Valley will receive notifications from the state warning that they must enforce public health laws, Cuomo said in a teleconference Wednesday morning.

Red zone schools that have been violating the state’s closure orders will receive a notice on Wednesday “mandating they close” and notifying them that the state is withholding their funding until they do so, Cuomo said.

He warned private school operators to not suddenly announce they’re operating as day care centers instead. Those have separate regulations and licensing and the state will enforce that as well.

It’s not about the entire community, it’s about outliers, he said, saying he was grateful that many in Ultra-Orthodox sects have been following the law.

Earlier Wednesday, YWN reported that highly credible sources tell our reporters that NY Governor Cuomo was livid on Tuesday night after watching a ABC7 news report showing hundreds of children coming out of a popular girls school in Boro Park.