Behind all of the false bravado & chest thumping of ineffective rabble rousers, aggressive Covid testing campaigns have been ongoing. These efforts led by well known community leaders & organizations under the guidance of Rabbonim with the stated goal of reducing the covid positivity rate, thus freeing orthodox neighborhoods in South Brooklyn from the Iron grip of the Cuomo RedZones. Unfortunately, despite the continuous testing, community leaders & politicians remain extremely frustrated with State & City authorities for their refusal to share pertinent and timely data that can assist these frantic efforts. An influential and respected community leader in Boro Park who didn’t want to be named for fear of the Governor’s staff told YWN, “as long as we don’t have real and updated data from the government, we are shooting blindly.” He continued, “we need the community to come out and get tested and see the fruits of those efforts realized in an easing of the lockdown. The status quo cannot remain like this, people are losing it.”

With thousands of children locked out of Yeshivos and small businesses drowning in fines the leaders and elected officials try every angle and tools to impress upon Governor Cuomo and Mayor deBlasio the untold damage being inflicted on their helpless citizens. So far press conferences, public appeal videos, & social media posts have not moved the needle. With Court cases winding their way through the system, community activists Chaskel Bennett and Leon Goldenberg filed FOIL requests to NYS DOH asking to see accurate Covid numbers in hopes that with better numbers, activists could better focus their extensive efforts on solving the problem. As the states response below reads, the state is passing the buck to the city and leaving community leaders to wonder why the zip code numbers are such a secret. Conspiracy theories aside, this seems to be standard Cuomo vs Deblasio with the Jewish community once again, stuck in the middle.

When reached by YWN, Mr. Bennett responded, “the City previously released Covid numbers by Zip Code. When the State created their color-coded zones, that information stopped being shared and the new information now provided was changed to include the entire RedZone in South Brooklyn and not by local zip codes. That makes it more difficult for community leaders to assist in targeting the rising infections in a micro cluster manner. We can offer the State & City a real partnership if they would just work with us, but unfortunately they have chosen an approach that sidelines the very leaders who could help fix this.”

“I feel and share the pain and anger of the fathers & mother’s who simply want their lives back. Government is failing the people it professes to care about. They need to do way better”, Bennett concluded. 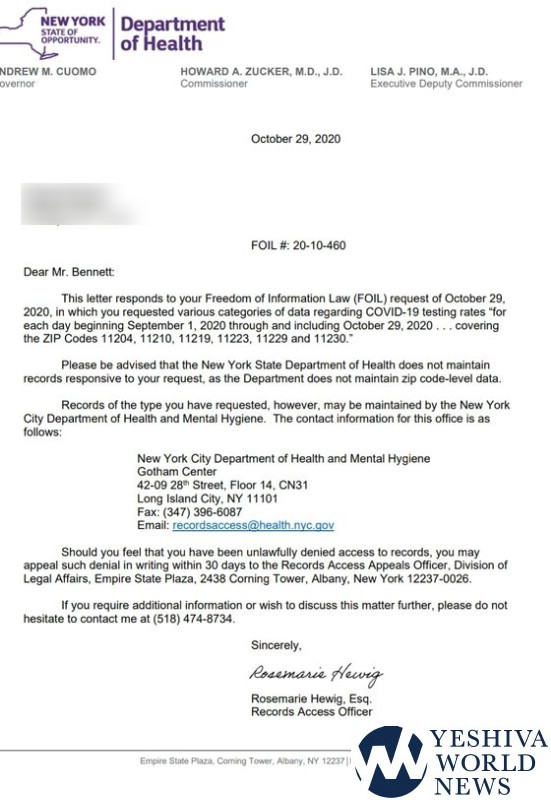