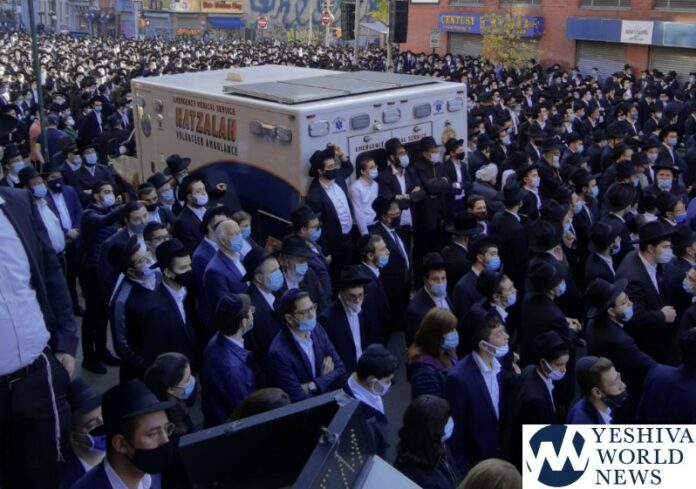 The NY Post once again revealed their glaring animus and double standard in reporting about the Orthodox Jewish community of NYC.

As YWN reported, the funeral of Hagaon HaRav David Feinstein was held today in Manhattan’s Lower East Side. Approximately 5,000 people attended, while well over 25,000 watched on live streams and thousands more on phone hookups. Without a doubt, tens of thousands of mourners honored the family’s request not to attend personally and stayed away. That the family requested that all attendees wear masks, and as photos show – nearly every single attendee wore masks, was of course completely ignored in the NY Post article. Rest assured, we would have heard about the ‘sacred’ masks if it would have been an issue. It wasn’t.

What the Post did include in its report however, was the following broadside at the end of the article:

Meanwhile, yesterday the same NY Post published an article about the tens of thousands that celebrated the election of Joe Biden as President. The article, titled “Thousands flock to Times Square to celebrate Joe Biden’s victory”, made absolutely no mention whatsoever of the gatherings being an issue due to COVID-19. It seems, the Post like our Governor & Mayor, only find fault with Orthodox Jews & nobody else. (See Cuomo’s Redzones)

Their hypocrisy is overwhelming, and yes unavoidable.

What has the Orthodox Jewish community ever done to the Post to deserve such persistent negative coverage? Is the community not conservative enough for America’s oldest Newspaper? Does it not warrant fair and unbiased coverage, like any other community? This isn’t the first time the Post has revealed an ugly bigotry against one of New York’s most maligned & persecuted groups. Frankly speaking we’re tired of being everyone’s punching bag. That goes for you too Mr. Governor.

The same paper that calls out Governor Cuomo and Mayor Deblasio for their heavy handedness and COVID mismanagement, is guilty of searing hypocrisy in its relentless negative coverage of religious Jews. How can anyone take the Post seriously when their “reporting” continues to be so blatantly biased against Jews? Why are religious Jews subjected to a negative elbow jab every time an event in our neighborhoods are covered by them? It must be said, these merciless swipes only serve to embolden the haters and anti-semites and there are many. They also inadvertently give political cover to an unchecked, power hungry Governor and an incompetent Mayor the New York Post rails against every day.

The famous saying goes, the enemy of my enemy is my friend, but the way the Post negatively covers the Orthodox Jewish community, it has to be asked, when and why did Orthodox Jews become the Post’s enemy? Rupert Murdock and Michael Goodwin have many fans and supporters in the Jewish community.

Something is rotten at the NY Post, and we demand answers.

How about the vast readership of YWN RESPECTFULLY contacts the NY Post and RESPECTFULLY voices their utter disgust at the blatant double standard in their reporting? Feel free to contact the Editors at [email protected].