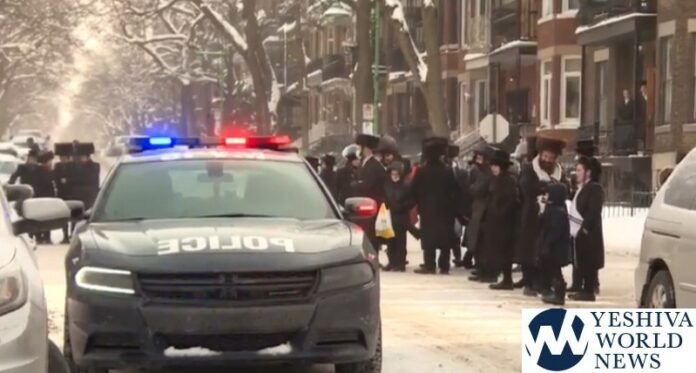 Police shut down at least three shuls in Outremont, Montreal on Friday night and Shabbos morning that were open in defiance of COVID enforcement.

Police said they were assaulted while trying to shut down one of the locations on Friday night.

Video footage from Friday night shows a large crowd screaming at police. Shouts of Nazi! can be heard as children are seen running from the building.

One person can be heard yelling “Jews Lives Matter”!

One person was arrested at one of the Shuls on Shabbos morning.

Officers took the names of people present at the scenes and will submit reports to Quebec’s office of criminal prosecutions, which will decide whether to pursue further penalties.

On Motzei Shabbos, Quebec’s Hasidic Jewish council made a public call asking all community members to follow public health guidelines after the incidents which have since been published on many Canadian news outlets.

“It is with regret that the Council of Hasidic Jews of Quebec has learned that certain members of the community have not respected the public health guideline limiting the number of people in a religious institution to 10,” the council said in a statement Saturday night.

While the Council of Hasidic Jews is denouncing any illegal gatherings that took place, the organization is also accusing the SPVM of not properly enforcing the law. At least one of the establishments in question has three separate entrances into three separate closed off spaces, the council said, allowing them to safely accommodate 10 people each.

“This misunderstanding of the regulations by police authorities adds to the confusion,” the council said in its statement.