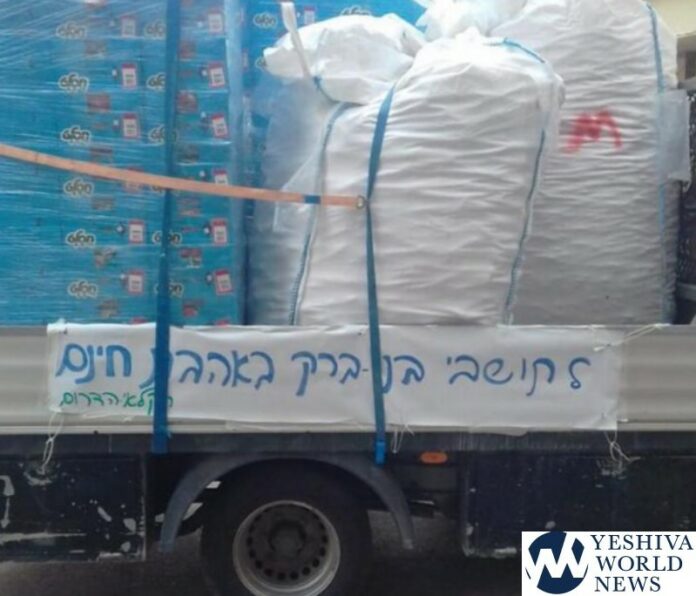 Residents of Bnei Brak were surprised to see tons of fresh fruit and vegetables delivered to the halls of Be’er Miriam in the city which were earmarked for free distribution to the residents. The benefactor of the delivery was a secular woman named Ricki Levitt, who had heard about the recent demonization of the residents of the city due to the Covid-19 controversy that has been plaguing the city this past week. Levitt decided to do something to show some Ahavas Chinam.

The way that the residents of the city have been portrayed over the past week in the media hurt Levitt, so she enlisted the help of farmers from Kibbutz Alumim, Sa’ad, and the city of Netivot, who all donated huge amounts of produce to be distributed to families who have been blessed with lots of children in the city.

In a video that has been widely shared around social media, Levitt said, “This was our way of sending a different message. I can’t sleep at night after seeing what was done here with the stun grenades, the clubs, and the use of force. I asked myself, what did the residents of Bnei Brak do to deserve this. I grabbed my phone and I called farmers from the area, and I am overjoyed to say that they all joined in and partnered with me on this in order to do something good.”

Levitt added: “The farmers felt that there was a need to raise the moral of the Chareidi residents in Bnei Brak, to whom a travesty has been done, including delegitimization and demonization. A small group of people on the sidelines have managed to discredit an entire city that is made up of quality people, people who regularly do acts of loving-kindness, good, decent people who are very disciplined. So this was our way to send a different message to those people, and to others.”