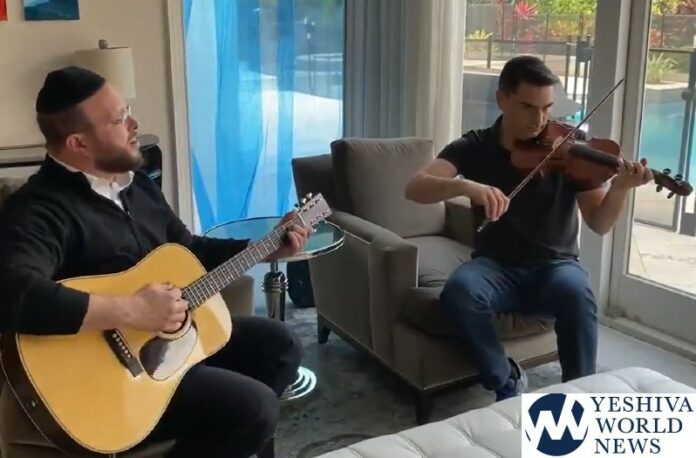 Ben Shapiro, the Orthodox Jewish talkshow host, surprised many in the Orthodox Jewish community on Tuesday, when he and and singer Eitan Katz both tweeted a video of them performing Katzs’ hit son “L’maancha” together. Katz was on his guitar, while Shapiro played his violin.

YWN has in the past reported that the two were classmates in high school. Shaprio has previously played “Le’mancha” for his audience, and revealed that he actually played a few violin lines on his first album.

Ben Shapiro (born January 15, 1984) is an American conservative political commentator, writer, and lawyer. He is the host of a podcast, The Ben Shapiro Show, that is downloaded 15 million times per month and is widely regarded as a top program for young conservative listeners. The show made it to radio airwaves when it was picked up by national syndicate Westwood One in April, the same company that syndicates popular shows such as The Savage Nation and The Mark Levin Show.

He is also the editor-in-chief of Daily Wire, a news website, and of late has taken on a greater role as an outspoken public intellectual alongside fellow “intellectual dark web” stars Jordan Peterson, Bret Weinstein, Jonathan Haidt, and Dave Rubin.

“L’maancha” with an old high school friend, the one and only @benshapiro pic.twitter.com/88NZjo9bHt

He is also the author of seven books, the first being 2004’s Brainwashed: How Universities Indoctrinate America’s Youth; Shapiro began writing this book at age 17. Also at age 17, Shapiro became the youngest nationally syndicated columnist in the United States. He was editor-at-large of Breitbart News between 2012 and 2016.

FUN FACT: the violinist on the early album “Biglal Avos” was none other than a young and talented @benshapiro pic.twitter.com/Vx9eT73x5j

Shapiro was born in Los Angeles, California. His family is Jewish, having emigrated from Russia and Lithuania. Shapiro developed talents in both violin and piano at a young age, notably having performed at the Israeli Bonds Banquet in 1996 at twelve years of age. Shapiro’s parents both worked in Hollywood. His mother worked as an executive of a TV company and his father as a composer.