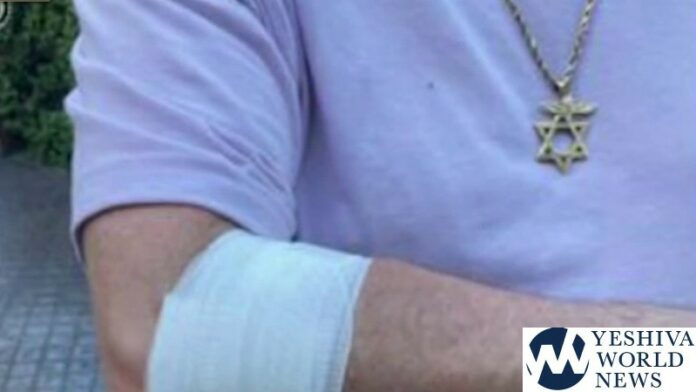 A tourist from New York was knocked to the ground along the Las Vegas Strip in broad daylight, Monday.

Paul Lebowitz, a NYC EMT, said he was clearly targeted for being Jewish.

Lebowitz said what started as a calm conversation at a coffee shop with a stranger, turned to a nasty gash on the back of his head.

“We talked about Israel-Palestine until he said, ‘the Jews are not going to exist’ and I said, ‘I’m a proud Jew.’ That’s when it got violent,” Lebowitz said.

The 67-year-old Lebowitz wore his Star of David neckless as the pair walked outside Eataly restaurant at Park MGM. The conversation escalated as they went along and then turned violent.

“He yells out, ‘baby killers!’ Puts his hand to my face and throws me to the ground. I fell back. I smacked my head,” Lebowitz recalled.

Lebowitz said he never laid a hand on the man, who towered over him. His family called 911, but by the time police arrived the man who had pushed him to the ground had disappeared.

The Las Vegas Metropolitan Police Department report is filed as battery, and police told Lebowitz surveillance footage will be used in the investigation.

“He’s anti-Jewish. It’s a hate crime to me,” Lebowitz said.