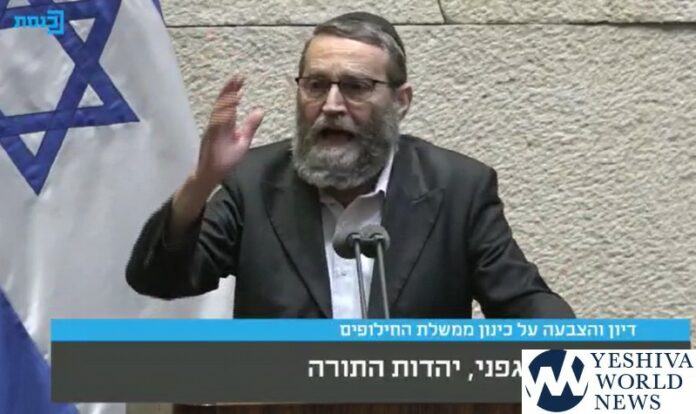 During the Knesset meeting to swear in the new government, UTJ leader and MK Moshe Gafni addressed the plenum and attacked the members of the newly formed coalition.

“I’ve read the coalition agreements and I didn’t see any point that discusses how we will care for Holocaust Survivors, there was one toothless statement about the elderly. There are eight parties in the coalition. I didn’t learn the basic secular studies in school, so maybe my math isn’t good but eight parties who don’t care about Holocaust Survivors, so what do they care about. Aside from all the jobs that they worried about giving to themselves?”

“What is in these coalition agreements? There is nothing. There is no mention of protecting Shabbos, no protection of Jewish conversion. Kashrus isn’t protected. Everything is disappearing. I will scream for the sake of my Rebbe Rabbi Shach Z’L. In what way are you Jewish? Without Shabbos, Without proper conversion regulations, without Torah, with secular marriage, without the Kotel. There is nothing. So I ask, in what way are you Jewish? There has never been anything like this before.”

“I don’t remember the MK who spoke before Meirav, (Matan Kahana) and he spoke about outright Chilul Hashem. So how are we any different than any other western country? How are we different from France, From the United States, or anyone else? There is no more Shabbos? How will you sit next to your children on Friday night and say Kiddush? What will you tell your children?”

“Then they ask us why we only sit with the right-wing? Come with us, they say. Sit with us in a government, by us it will be good for you. With you it will be good? What will be good? You simply don’t respect us at all. You think you can create a coalition government that doesn’t have a single mention of anything Jewish. You think you can buy us with money? We have just proven that unlike you, we are people who follow our ideologies. We have ideology, we believe in the things that are most important.”