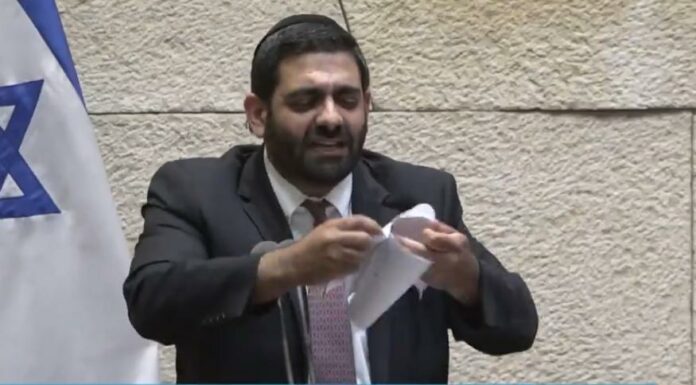 MK Michael Malkieli (Shas) gave his first speech as an opposition member in the Knesset. During the very combative speech, Malkieli referred to the newly appointed Prime Minister Naftali Bennett as “the Con Man from Ra’anana”, and Avigdor Lieberman as “The bully from Nokdim.” At the end of his speech, Malkieli tore up a copy of the coalition agreements at the Knesset podium.

Malkieli attacked the newly formed government and said: “This is a gathering of swindlers, and Bennett sits at the head of it. They do not intend to do any of the things they agreed upon here in this agreement, and they wouldn’t be able to even if they tried. We will make certain that he (Bennett) will fly out of here with embarrassment all over his face.”

Malkieli pointed out that there were several contradictions in the agreement itself. “As part of the agreement with Ra’am, the Swindler from Ra’anana agreed to recognize three bedouin towns, whereas the towns of Judea and Samaria have been screaming for recognition for years, and some of them don’t even have water or electricity.”

“The bully from Nokdim wants to erase any scrap of Judaism that has lasted here for the past 73 years, some of which were very difficult to maintain.”

“Don’t make any promises when it comes to the Torah world,” Malkieli shouted at Bennett. “We know how to safeguard the world of Torah with all of our might. This is our Sayeret Matkal. We won’t allow anyone to touch even a single person who studies Torah, whatever the cost may be.”