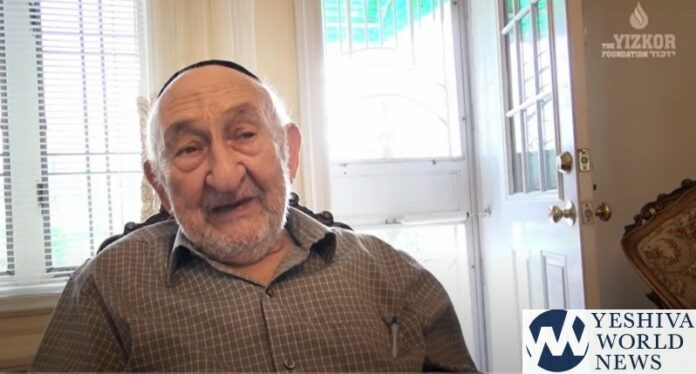 This video is an interview between Mr. Shmuel Beller, a Holocaust survivor, and Mr. Heshy Rubenstein of the Yizkor Foundation.

Mr. Shmuel Beller was born in Oswiecim, Poland (what would later become the Auschwitz concentration camps) to his parents Tzvi and Chava (Goldstein) Beller. Before the war, he attended the local Talmud Torah until age twelve, when the war broke out. On September 1, 1939, Nazis arrived on motorcycles to Shmuel’s hometown. With the introduction of Nazi presence to Auschwitz, the local Jews’ quality of life immediately dwindled. Within two weeks of the Nazis’ arrival, Jews were evicted from their own stores. Six months later, Jews were kicked out of their own apartments and relegated to basements. Soon thereafter, Shmuel moved to Sosnowitz, where he worked for a clothing manufacturer in the morning and cleaned homes in the afternoon until the beginning of 1943. He never saw his siblings or parents again. From there he was relocated to several forced labor camps, where he endured a death march and was forced to engage in grueling labor for the Germans.

After the liberation in 1945, Mr. Beller was transferred to a local hospital, where he spent three months.

The sole survivor of his family, Mr. Beller immigrated to America shortly thereafter, and he lives in Brooklyn today.

This video series is intended for use in schools and synagogues for educational purposes. As the possibility of talking to Holocaust survivors firsthand about their experiences during the Shoah grows slimmer with the passing of time, recorded interviews that allow us a glimpse into the mass atrocities and persecution (as well as the strength and kiddush Hashem that many Jews displayed in the face of the Holocaust) becomes increasingly crucial.

These interviews will serve to educate us now, but even more importantly, the future generations will benefit from the survivors’ timeless insights and accounts as well.

If you know of a Holocaust survivor who would be willing to be interviewed, please contact the Yizkor Foundation.

The Yizkor Foundation was created 20 years ago by Heshy and Yossi Rubinstein with the purpose of perpetuating the testimonies of those who were in the Holocaust and for educating future generations. Now, more than ever, in the era of information, we are experiencing also dis-information, therefore it is utmost important to provide evidence of what happened in Europe and remember how it started, so that it will never be forgotten.

If you know of any Holocaust survivor or WW2 veterans that wish to be interviewed, please contact us at: [email protected]

All images/graphics were taken from The United States Holocaust Memorial Museum (at www.collections.ushmm.org) and so, all copyright’s for the aforementioned belong to them.