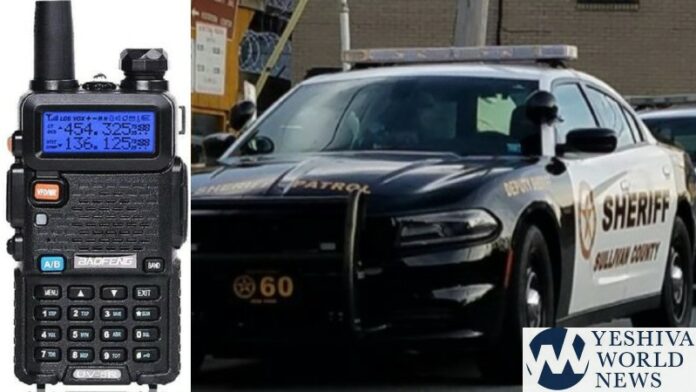 Law enforcement sources tell YWN, that multiple times over the past few days, children have been interfering with the Sullivan 911 Frequency, the Sheriff Department and other emergency frequencies in the area.

The Sheriff Department has since contacted the FCC, and a heavy investigation is underway.

YWN sources confirm that the interference is coming from the Monticello area, and law enforcement are pretty close to finding the culprit(s), as they have narrowed down the area. YWN is in possession of recordings of the radio communication, and we can confirm that it is unfortunately children of the Orthodox Jewish Community – most likely Hasidic children.

“This type of activity could result in someone’s death”, Schiff said.

“We are working with community leaders as well as State and Federal Authorities to track down the individuals making these transmissions. If you know a child or teenager who has one of these radios you should take it away from them immediately, before the police show up at your door.

“Parents, guardians and even camp directors can be held responsible for the actions of these young people”, Schiff added.

IF YOU RECOGNIZE THIS CHILDS VOICE IN THE RECORDING BELOW, TAKE ACTION NOW AND CONFISCATE THE RADIO

YWN has previously reported that Hatzolah emergency radio frequencies have also suffered interference many times from children – and even adults – using unauthorized radios.

Years ago, radio communication equipment was very expensive, with radios costing in the range of $1000 – $2000 per radio. Thanks to electronics made in China, radios capable of transmitting on every frequency – including that of Police, EMS, Hatzolah – can now be purchased for as low as $30! Children who once upon a time had “scanners”, now have devices capable of transmitting over emergency radio frequencies. This has already caused interference during life threatening emergencies when Hatzolah members on scenes have been unable to communicate with their dispatcher to relay vital information in which seconds can make a difference in saving a life.