Former President Donald Trump lunged at a Secret Service agent in a rage in the presidential limousine when told he could not be taken to the U.S. Capitol on Jan. 6, 2021, a former White House aide testified Tuesday.

“I’m the (EXPLETIVE REMOVED) president, take me up to the Capitol now!” Trump insisted, according to the aide, Cassidy Hutchinson, describing what she was told had happened in the limo that day by another White House aide, Tony Ornato.

Trump also grabbed the steering wheel of the limo in a fury after learning he would not be taken there, Hutchinson said.

Hutchinson, who served as a top aide to Trump White House chief of staff Mark Meadows, revealed the dramatic incident for the first time at an abruptly scheduled hearing of the select House committee investigating the Jan. 6 riot at the U.S. Capitol.

“My guess is that before this is over, we will be hearing testimony from Ornato, Engle, (sic) and Meadows,” Mulvaney said of the three biggest characters in Hutchinson’s testimony.

“This is explosive stuff. If Cassidy is making this up, they will need to say that. If she isn’t they will have to corroborate,” Mulvaney added. “I know her. I don’t think she is lying.”

Meanwhile, Trump took to his TRUTH Social platform to blast the testimony, and denied that he tried to grab the steering wheel of the “Beast” presidential limousine on Jan. 6 after a Secret Service agent told him he couldn’t go to the Capitol.

“Her Fake story that I tried to grab the steering wheel of the White House Limousine in order to steer it to the Capitol Building is ‘sick’ and fraudulent, very much like the Unselect Committee itself – Wouldn’t even have been possible to do such a ridiculous thing,” Trump posted on his social media network Truth Social. “Her story of me throwing food is also false…and why would SHE have to clean it up, I hardly knew who she was?”

Trump referred to another incident brought up during Tuesday’s hearing, during which he allegedly threw his lunch at the wall after reading a story by The Associated Press from early December 2020, detailing that then – Attorney General Bill Barr did not find widespread fraud in the election. 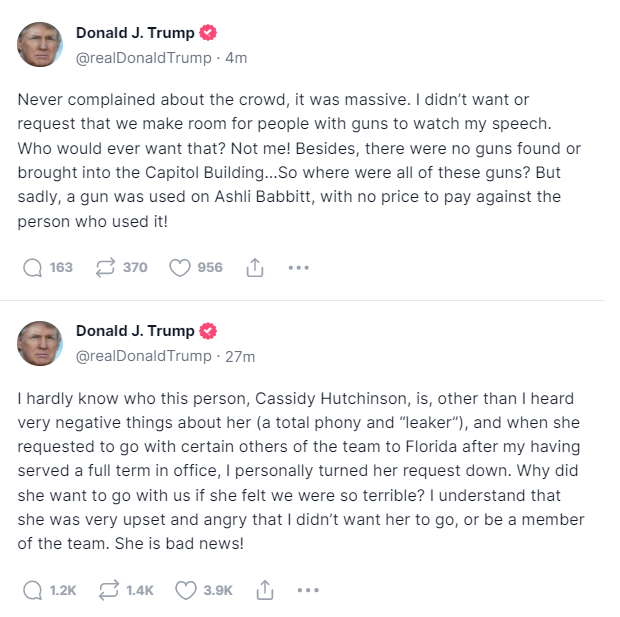 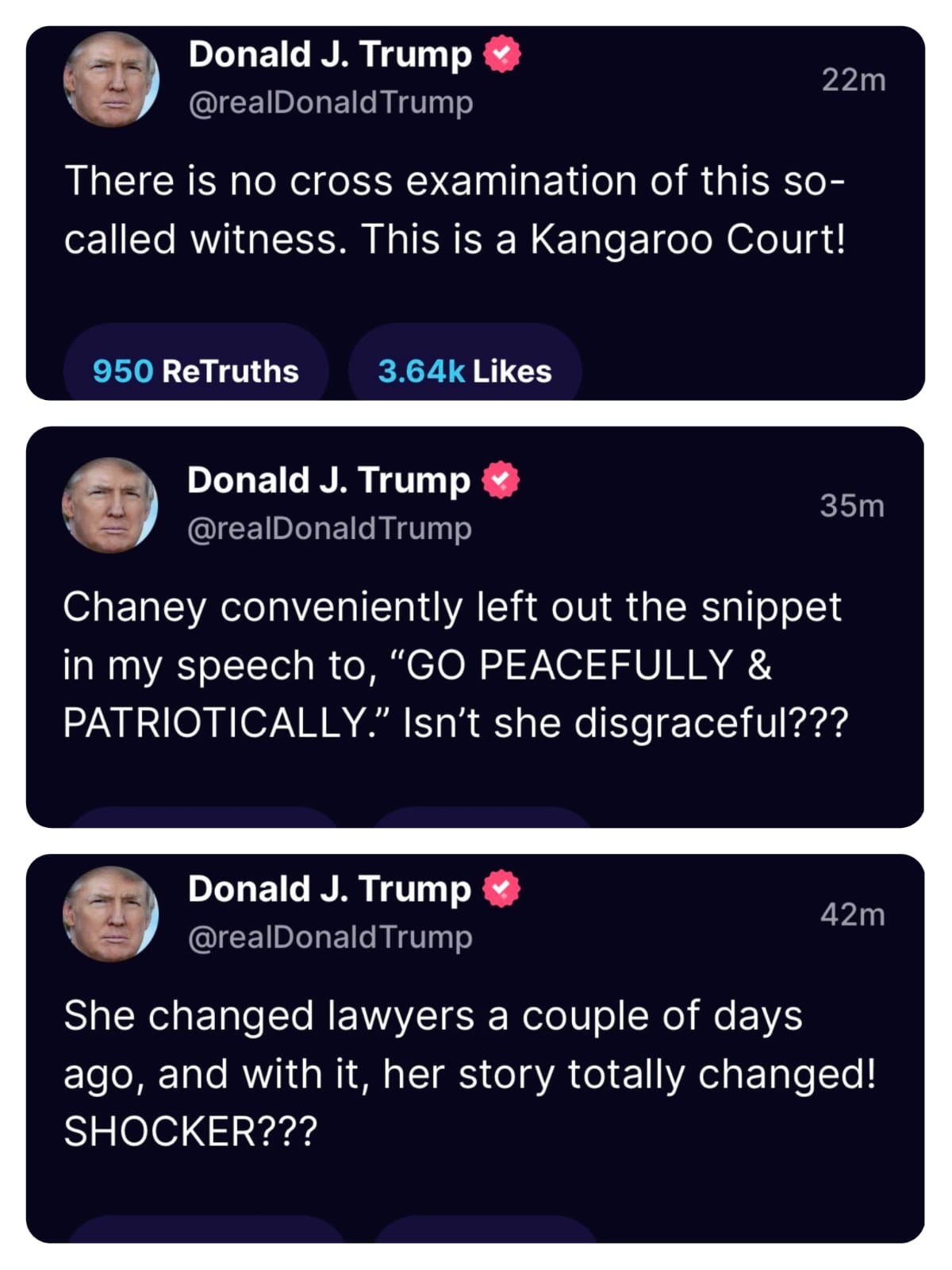 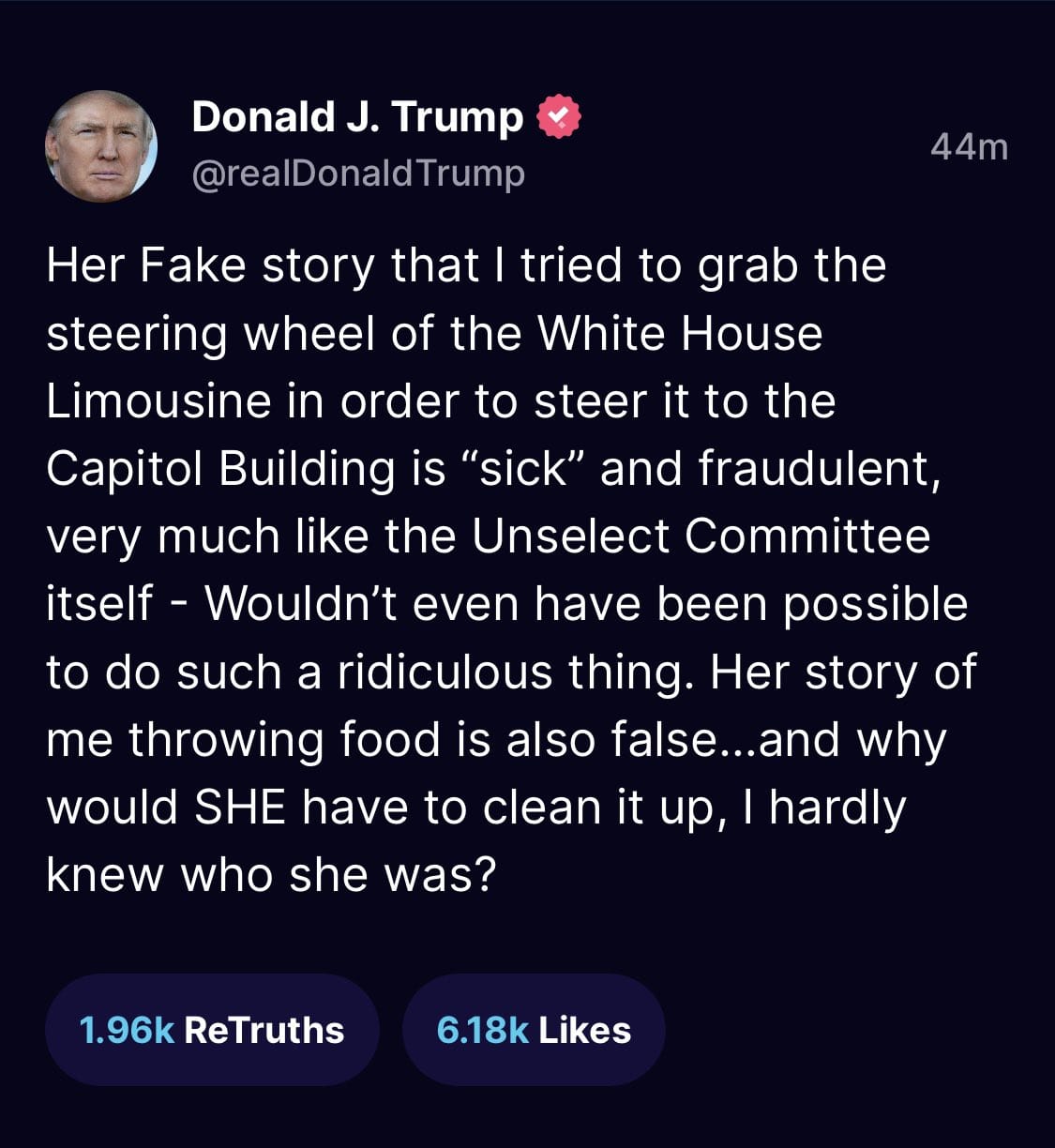