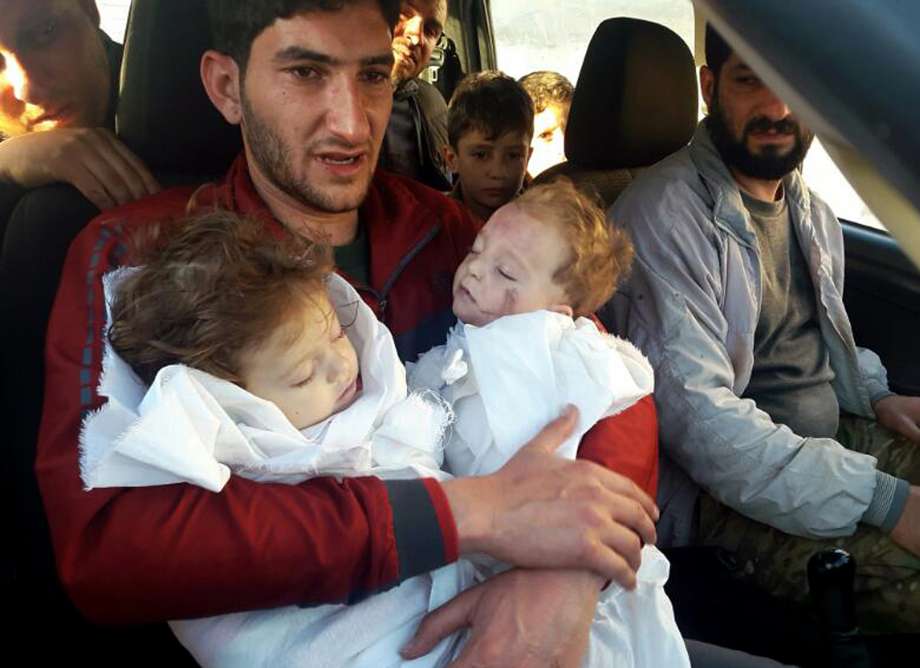 France’s foreign minister said on Wednesday that the chemical analysis of samples taken from a deadly sarin gas attack in Syria earlier this month “bears the signature” of President Bashar Assad’s government and shows it was responsible for the deadly assault.

According to Foreign Minister Jean-Marc Ayrault, France came to this conclusion after comparing samples from a sarin attack in Syria from 2013 that matched the new ones. The findings came in a 6-page report published Wednesday.

The Kremlin promptly denounced the French report, saying the samples and the fact the nerve agent was used are not enough to prove who was behind it. Assad has repeatedly denied that his forces used chemical weapons and claimed that myriad evidence of a poison gas attack is made up.

But Ayrault said France knows “from sure sources” that “the manufacturing process of the sarin that was sampled is typical of the method developed in Syrian laboratories.”

“This method bears the signature of the regime and that is what allows us to establish its responsibility in this attack,” the top French diplomat added, saying that France is working to bring those behind the “criminal” atrocities to international justice.

France’s Foreign Ministry said blood samples were taken from a victim in Syria on the day of the April 4 attack in the opposition-held town of Khan Sheikhoun in Idlib province in which more than 80 people were killed.

Environmental samples, the French ministry said, show the weapons were made “according to the same production process as the one used in the sarin attack perpetrated by the Syrian regime in Saraqeb” on April 29, 2013.

Ayrault also said that French intelligence services showed that only Syrian government forces could have launched such an attack — by a bomber taking off from the Sharyat airbase. “The regime’s Air Force…. is the only one with these aerial capabilities,” Ayrault said.

Meanwhile, France’s presidency said the country’s intelligence services presented evidence showing the Syrian government “still holds chemical warfare agents, in violation of the commitments to eliminate them that it took in 2013.” It said that information will be made public, without offering details.

It’s thought that Assad’s government still has a stockpile of tons of chemical weapons, despite saying it had handed over all of them.

Speaking to reporters in Moscow, Kremlin spokesman Dmitry Peskov said Russia’s position on the attack is “unchanged” and that “that the only way to establish the truth about what happened near Idlib is an impartial international investigation.”

Russia has previously urged for an international probe, and Peskov expressed regret that the Organization for the Prohibition of Chemical Weapons, or OPCW, has turned down the Syrian government’s offers to visit the site of the attack and investigate.

The French minister’s comments came as the OPCW, which is investigating the April 4 attack, held a ceremony in The Hague marking the 20th anniversary of the Chemical Weapons Convention.

In a video message to the ceremony, U.N. Secretary-General Antonio Guterres said that the organization’s progress over two decades seeking to eliminate chemical weapons is now under threat.

“In the Middle East, belligerents are breaking the norm against chemical weapons,” he said. “The recent attack in Syria was a horrific reminder of the stakes. There can be no impunity for these crimes.”

The United States has also blamed Assad’s government for the April 4 attack. The Trump administration fired cruise missiles at a Syrian air base in retaliation and issued sanctions on 271 people linked to the Syrian agency said to be responsible for producing non-conventional weapons. Syria has strongly denied the accusations.

Earlier Wednesday, Russian Foreign Minister Sergey Lavrov said the U.S. airstrike at the Syrian military base damages the prospects of a political settlement for the war-torn country.

Lavrov told a security conference in Moscow the U.S. response “pushes the prospect for a wide international front on terror even further away.”

He also dismissed claims that international experts cannot visit the site in Khan Sheikhoun because of security precautions and criticized the OPCW for failing to go there. Lavrov says claims that the experts were warned by a U.N. body against traveling to the location because it’s unsafe are “lies,” adding that Moscow went back to the U.N. and found out that there was no such warning.

Defense Minister Sergei Shoigu said Russia had to boost security measures at its air base in Syria after the U.S. airstrike at the Syrian base. Russia has provided an air cover for the government’s offensive on Islamic State militants.

In other developments, the U.S.-backed Syrian Kurdish forces asked for the U.S.-led coalition to provide air cover over northern Syria, to protect them from Turkish and Syrian government air raids.

A video emerged on the internet on Wednesday purporting to show an American officer inspecting the site, drawing large crowds who followed him around. The officer was not identified in the video.

The Kurdish-led Syrian Democratic Forces are the U.S.’s main partner in the battle against the Islamic State group in northern Syria. NATO member Turkey sees some of the SDF fighters as an extension of a terror insurgency group within its own borders.