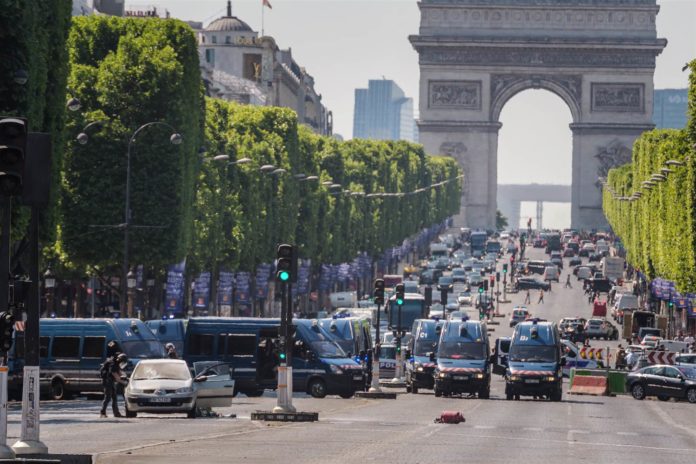 The Frenchman killed when he drove a car packed with arms and explosives into a Paris police convoy in a failed attack had pledged allegiance to the leader of the Islamic State group and asked his family to remember him as a martyr, France’s anti-terrorism prosecutor said Thursday.

Paris prosecutor Francois Molins, citing a letter resembling a will that was dated Monday, the day of the attack on the French capital’s famed Champs-Elysees Avenue, said the man had pledged his allegiance to Islamic State leader Abu Bakr al-Baghdadi and practiced shooting “to prepare for jihad.”

The letter to his loved ones asked that his attack plan be treated not as a suicide attack but as a “martyrdom operation,” Molins said.

The man, whom the prosecutor identified only as Adam D., had been on the radar of French authorities for Islamic extremism. Molins said Tunisian authorities put out a search warrant for him in 2014 on suspicion of ties to a terrorist group. The prosecutor confirmed that, nevertheless, he had authorization to carry various arms.

The operator of a shooting club told French TV that Adam D. practiced his aim there.

Such contradictions appear perplexing in a country that has been in a state of emergency since 2015 after multiple deadly terror attacks.

Police officials earlier identified the suspect as 31-year-old Adam Djaziri. The prosecutor said he was born in the northeast Paris suburb of Argenteuil, but lived south of Paris.

The French government moved Thursday to extend the state of emergency until November and presented to the Cabinet a new security to bill to beef up police powers, one of several pledges by President Emmanuel Macron.

Macron told European newspapers that France must “organize … for the long term” because the terror threat is lasting.

Monday’s incident was the second time French security forces had been confronted with terrorism on the Champs-Elysees in two months, the prosecutor noted. An officer was killed there in April and there have been three other instances this year in which French police have been targeted.

Molins said the would-be attacker had a huge cache of weapons both at home and in the vehicle he drove. Two 13-kilogram (28.7-pound) canisters of gas, their safety caps sealed, were found in its back seat. Evidence from the investigation shows the suspect wanted to join IS forces in Syria and Iraq, the prosecutor said.

The attack on a sunny day on the tourist-filled avenue was aborted when the car exploded after the driver rammed the lead car in the police convoy, killing himself, Molins said. A strange orange cloud enveloped the car, whose origin has not yet been determined, the prosecutor said.

Police jumped out of the vehicle, ran to the car, smashed its windows and pulled out the driver in an apparent attempt to save him.

Neither passers-by nor police were harmed, and it remained unclear if the police convoy was his real target. Video cameras show his car was cruising in tourist haunts between the Eiffel Tower and the Champs-Elysee in the hour before the attack.

“The arsenal discovered in the vehicle shows that the scope of the terrorist act planned which, if it had succeeded, could have had dramatic human consequences,” Molins told reporters.

The prosecutor noted the letter the man mailed to several loved ones on the day of the planned attack, saying he had for years supported “the Mujahedeen who fight to save Islam and the Muslims.” Swearing his allegiance to the Islamic State group leader, the attacker also said his numerous efforts to reach Syria were stopped by “apostates against the Islamic State.”

A huge quantity of weapons — including assault rifles, a Glock handgun, chargers, many thousands of rounds of ammunition and knives — were found on the man’s body, in his car or at his home south of Paris, Molins said, calling the caches “indisputable preparation” of his plans to act.

Married since 2009 to a Tunisian, with whom he had two daughters, Adam D. made numerous trips to Turkey — three times in 2016 alone — and said he was there for his job as a metal importer and jewel trader. Once last year, he had gold, jewels and nearly 5,000 euros on him, Molins said.