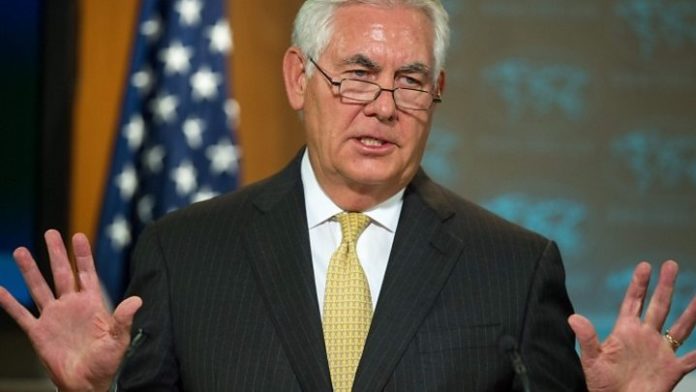 The Trump administration clarified Monday that it’s not seeking to overthrow North Korea’s government after the president tweeted that Kim Jong Un “won’t be around much longer” and Pyongyang interpreted it as a declaration of war.

Ratcheting up the rhetoric further, the North’s top diplomat also argued Monday that Trump’s comment gives it the right to shoot down U.S. warplanes in international airspace.

Trump’s Saturday tweet said: “Just heard Foreign Minister of North Korea speak at U.N. If he echoes thoughts of Little Rocket Man, they won’t be around much longer!” Trump also used “rocket man” for Kim in his speech to the U.N. General Assembly last week.

While the comments may be read as an implicit threat to eliminate Kim, a senior administration official said Washington hadn’t changed its policy. American efforts in North Korea aren’t aimed at regime change, said the official, who wasn’t authorized to comment publicly on the issue and requested anonymity.

But the more Trump muddies the picture, the tougher it may become to maintain cooperation with China and Russia, which seek a diplomatic solution to the nuclear crisis and not a new U.S. ally suddenly popping up on their borders. It also risks snuffing out hopes of persuading Kim’s government to enter a negotiation when its survival isn’t assured.

Military maneuvers are adding to tensions along the two Koreas’ heavily militarized border. In a show of might to North Korea, U.S. bombers and fighter escorts flew Saturday to the farthest point north of the border between North and South Korea by any such American aircraft this century.

Pentagon spokesman Army Col. Rob Manning said Monday the operation was conducted in international airspace and legally permissible. The U.S. has a “deep arsenal of military options to provide the president so that he can then decide how he wants to deal with North Korea,” he said.

“We are prepared to defend ourselves and our allies from an attack and are prepared to use the full range of capabilities at our disposal against the threat from North Korea,” Manning told reporters.

North Korea’s foreign minister, Ri Yong Ho, said Monday that the world doesn’t want “the war of words” between his country and the U.S. to “turn into real action.” But he said Trump’s claim that “our leadership wouldn’t be around much longer” escalates the conflict.

“Given the fact that this comes from someone who is currently holding the seat of (the) United States presidency, this is clearly a declaration of war.”

Ri also said North Korea now has “every right” to take countermeasures, including shooting down U.S. strategic bombers “not yet inside the airspace border of our country.”

North Korea has responded to past U.S. slights by equating them to declarations of war — a state that still formally exists between them because the 1950-53 Korean War ended with an armistice, not a formal peace treaty.

In July 2016, North Korea said U.S. sanctions on leader Kim and other top officials for human rights abuses were tantamount to a war declaration. After that, the North severed a tenuous diplomatic channel to the State Department, which was renewed once Trump took office.

A rapid series of missile and nuclear tests this year have raised alarm that North Korea is nearing its longstanding ambition of having an arsenal of weapons of mass destruction capable of striking the United States.

The General Assembly gathering, usually a time for diplomacy, has only added to global unease over the nuclear standoff. In his first U.N. speech, Trump threatened to destroy Korea if it attacks the U.S. or its allies. Kim responded with a rare statement, calling Trump “deranged” and warning of a stern “countermeasure.”

Hours later, Ri said the North’s response could be to detonate a hydrogen bomb in the Pacific. Its past nuclear tests have been underground inside North Korea.

Associated Press writers Lolita C. Baldor in Washington and Edith M. Lederer at the United Nations contributed to this report.