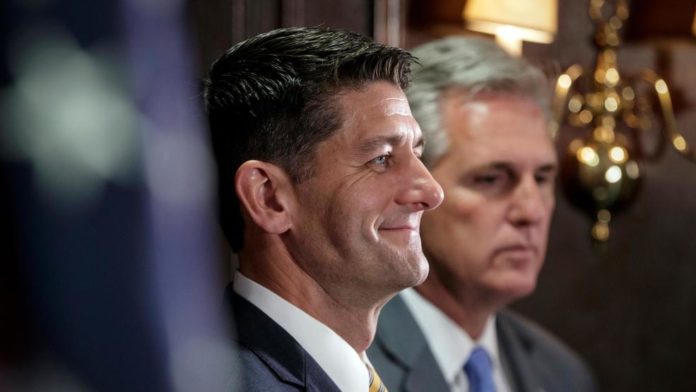 It was a victory lap Speaker Paul Ryan couldn’t resist, and he got to do it twice.

When the House approved the $1.5 trillion Republican tax bill Tuesday and again Wednesday with minor changes, it was a beaming Ryan who emphatically pounded the gavel, announced the vote and applauded his bellowing GOP colleagues.

The moment put lawmakers on the cusp of shipping the measure to President Donald Trump and achieving one of Ryan’s — and his party’s — long-cherished goals. Since entering the House in 1999 as a 28-year-old whose resume ranged from fitness trainer to congressional aide, Ryan has evolved into a dominant GOP voice on tax and budget issues.

Few dispute that the Wisconsin Republican can claim the tax bill’s passage as a personal triumph. But in a capital obsessed with political survival, the coming few days and the 2018 election year loom as a complicated and risky time for Ryan.

To ward off a Christmas-season or January government shutdown and win defense spending boosts, GOP leaders will eventually need a compromise with Democrats demanding domestic program increases and an immigration deal. That could anger his party’s most conservative members, who helped push previous Speaker John Boehner, R-Ohio, into early retirement in 2015 when they decided he was too prone to cut bipartisan agreements.

“I can’t imagine that a historic tax reform package would be enough credit to stop backlash from a bad spending and immigration bill that gets put on the House floor,” Rep. Mark Meadows, R-N.C., leader of the hard-right House Freedom Caucus, said in an interview Tuesday. “It’s just not the way that politics happen. They’re viewed as two separate things.”

Up next will be the 2018 agenda, which Ryan envisions focusing on squeezing savings from benefit programs that moderates from competitive districts are leery of touching. Then comes November’s midterm elections, in which Trump’s unpopularity means the GOP faces a real chance of losing House and Senate control.

“He’s got to hold the House,” said former Rep. Tom Davis, R-Va., who once led the House GOP’s campaign efforts. “At the end of the day, part of the report card of leaders is they’ve got to re-elect their members.”

For now, Ryan is relishing congressional approval of the tax bill, which Trump is certain to sign. His desire to revamp the code was evident in 1998, when as congressman-elect he complained during a C-SPAN interview that existing laws were inhibiting practices “that make America great,” two decades before Trump made similar words famous.

“I am very pleased with how far we pushed the art of the possible,” Ryan said Tuesday in an interview with The Associated Press of the GOP tax push.

With a tricky 2018 approaching, speculation has arisen that flush from victory, Ryan would leave Congress after the tax legislation becomes law or after next year’s elections. He’s tried squelching that talk, though in a less than airtight way.

“I’m not going anywhere anytime soon, and just let’s leave that thing at that,” he told reporters.

Davis, the former Virginia GOP congressman, says it would be a “huge mistake” for Ryan to depart before the 2018 elections because “it would signal to Republicans across the country that he’s abandoning ship.”

After this year’s crash of the GOP effort to repeal President Barack Obama’s health care law, most Republicans viewed the tax bill as a crucial achievement to show voters.

“A lot of people are thinking, ‘This is one of the reasons I came here,'” said Rep. Jeb Hensarling, R-Texas. “There are just so many post offices you can rename.”

Even so, conservatives are already pressuring Ryan in their direction. While denying rumors they may try forcing a vote on removing Ryan from the speakership, they’re not shy about saying they’ll be watching closely.

“Once the euphoria of passing the tax bill wears off, we’ll have to turn to other issues like spending,” said conservative Rep. Thomas Massie, R-Ky., who’s clashed often with GOP leaders. “It depends how the speaker picks his way forward.”

A bipartisan compromise on spending and protecting immigrants from deportation who arrived illegally as children — the so-called Dreamers — would likely garner enough Democratic and GOP votes to pass Congress despite conservatives’ objections. But no party leader wants lingering resentment among their rank-and-file that could result in defections on future bills or even attempts to topple them.

“Any leader if they’re going to lead has to make sure they’ve got followers behind them,” said former Rep. Tom Reynolds, R-N.Y., who entered Congress with Ryan.

Besides alienating conservatives, Ryan — his party’s 2012 vice presidential candidate — must balance an assertive 2018 agenda with shielding moderates from damaging votes.

Though final decisions remain, Ryan has discussed trying to revamp benefit programs that could include Medicaid, welfare and food stamps. Most Republicans expect that drive to avoid reshaping Medicare and Social Security, which help older people and would be politically perilous.

It’s unclear whether curbing benefit programs would have enough GOP support to get off the ground. While conservatives say they’re eager to tackle those costly programs, moderates from swing districts show little enthusiasm.

“We should focus next on infrastructure,” said Rep. Ryan Costello, R-Pa., when asked about curbing benefit programs.