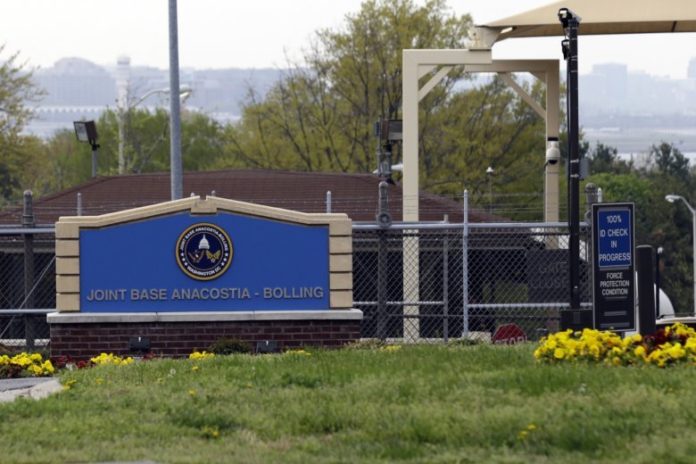 Thanh Cong Phan, 43, of Everett, was charged with one count of shipment of explosive materials in federal court in Seattle, where he made his initial appearance Tuesday.

A complaint alleges that Phan shipped a vial containing black powder with a fuse on March 16 from a U.S. Postal Service kiosk in Mill Creek, north of Seattle. Ashwin Cattamanchi, a public defender representing Phan, declined to comment on the case when reached by phone.

Eleven suspicious packages were received through the U.S. Postal Service at various government agencies and military installations in the Washington D.C. area, including the U.S. Secret Service White House Mail Screen Facility, the Naval Surface Warfare Center Dahlgren Division, in Dahlgren, Virginia, and the mailing facility for FBI headquarters in Baltimore, according to the complaint.

Each package contained what appeared to be a homemade explosive device in a small glass bottle with an unknown black power with a fuse, the complaint says. It also contained a typewritten letter with “ramblings about neuropsychology, mind control, and other subjects including terrorism.”

The facilities were evacuated and shut down when the packages were discovered, causing considerable disruption to government operations, the complaint said.

No packages exploded or caused injuries, the U.S. Attorney’s Office in Seattle said.

One package sent to the FBI’s mailing facility was tested by FBI bomb technicians. They confirmed it tested positive for an ingredient found in a low explosive powder known as double base smokeless powder, which could be detonated or explode when confined.

Phan was arrested Monday at his home in Everett after a U.S. Postal Service inspector traced one of the packages to a Mill Creek self-service kiosk.

Authorities said surveillance photos appeared to show Phan at the kiosk and the postal inspector also determined that Phan paid for the package.

Phan’s detention hearing is set for Friday. His motive was not immediately clear.

He had previous contacts with authorities. He had been known previously to law enforcement because he had hundreds of letters and emails to various government agencies containing “similar incoherent ramblings,” the complaint alleges.

In late 2011, Phan was charged in Washington state court with unlawful passion of a firearm. Court records show he had a 1990 conviction for felony second-degree assault and was prohibited from having a weapon.

Snohomish County sheriff’s deputies discovered he had a handgun in his backpack when they responded to a mental health call in May 2011 in the Everett area. According to a probable-cause affidavit, Phan “made bizarre statements to them which gave deputies concern about the defendant’s mental health and safety.” The deputies took him into protective custody for an involuntary mental health commitment.

The weapon charge was dismissed in 2015 after Phan completed an alternative diversion prosecution program.

Defense Secretary Jim Mattis told reporters Tuesday that all of the packages sent to Defense Department facilities are under the control of the federal authorities.

“Basically there’s a set procedure, they went through the procedure,” said Mattis. “We’ve had nobody injured and all those packages and all the evidence is accessible and is the hands of the FBI right now.”