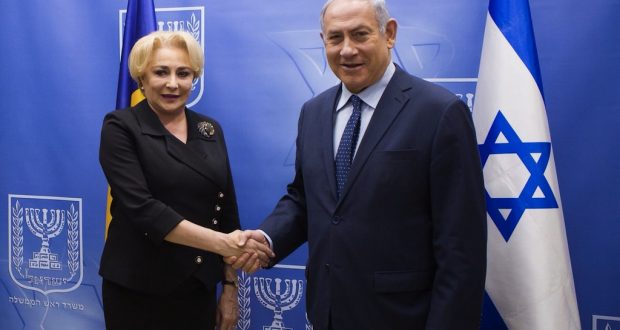 Israel’s prime minister has thanked his visiting counterpart from Romania for her government’s stand on possibly moving Romania’s embassy to Jerusalem.

Benjamin Netanyahu met Romanian Prime Minister Viorica Dancila who is on a two-day visit. Netanyahu’s statement on Wednesday welcomed the “Romanian government’s approval of a draft decision on initiating the transfer of the Romanian Embassy to Jerusalem.”

Earlier this month, Liviu Dragnea of the Social Democratic Party which effectively runs Romania’s government, said Bucharest is ready to follow the U.S. and move its embassy to Jerusalem.

But Romanian President Klaus Iohannis, who is in charge of foreign policy, later downplayed the announcement.

Palestinians claim eastern Jerusalem, territory captured by Israel in the 1967 war from Jordan, as their future capital.

Israel claims all of Jerusalem as its eternal capital.