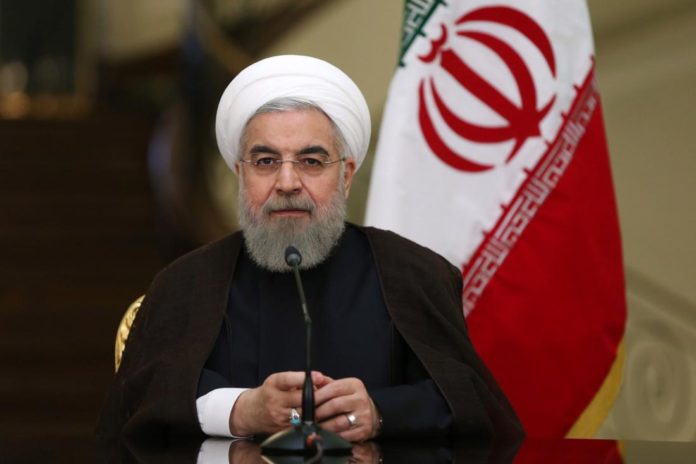 Iran’s president on Tuesday warned the country could face “some problems,” just hours before President Donald Trump was to announce whether he is pulling America out of the nuclear deal between Tehran and world powers.

Without directly naming Trump, Hassan Rouhani’s remarks at a petroleum conference in Tehran represented the first official Iranian comment on the U.S. president’s overnight tweet that he’d make an announcement on the deal Tuesday.

“It is possible that we will face some problems for two or three months, but we will pass through this,” Rouhani said.

Rouhani also stressed Iran wants to keep “working with the world and constructive engagement with the world.” That appeared to be a nod to Europe, which has struck a series of business deals with Iran since the landmark 2015 nuclear deal.

Later on Tuesday, Iranian Foreign Minister Mohammad Javad Zarif was quoted by the semi-official Tasnim news agency as saying that if Trump pulled out the deal, he won’t be able to “reach such a deal” again.

Trump and the United States also came under fire from Iran’s first vice president, Eshaq Jahangiri, a popular reformist politician who has been suggested as a possible presidential contender in Iran’s 2021 election.

“Today, the biggest power in the world is yelling that it does not accept it (the deal),” Jahangiri said, according to the semi-official ISNA news agency. “It’s up to them what to do with the deal, but (from now on) naive individuals would accept to enter talks with such a country.”

“We are ready and have a plan for managing the country under any circumstance,” he added.

Jahangiri’s comments suggest a coming political turn against any rapprochement with the West if Trump pulls out of the deal, especially as he is a reformist — a politician who advocates for change to Iran’s theocratic government. It also comes as Trump is set to meet with North Korean leader Kim Jong Un later this year, where negotiations will undoubtedly include talks about the Asian country’s atomic weapons program.

Trump’s announcement, set for the 2 p.m. EST at the White House, will come after nightfall in Iran.

Iran’s 2015 nuclear deal imposed restrictions on the Islamic Republic’s nuclear program in return for the lifting of most of the U.S. and international sanctions against Tehran.

However, the deal came with time limits and did not address Iran’s ballistic missile program or its regional policies. Trump has repeatedly pointed at that, while referring to the accord as the “worst deal ever.” However, proponents of the deal have said those time limits were to encourage more discussion with Iran in the future that could grow into addressing those other concerns.

Rouhani, shown smiling and addressing an audience at a table at the expo Tuesday, sought to show calm to Iranians. Meanwhile, Iran’s parliament speaker Ali Larijani reportedly said Trump pulling out of the deal would increase unity among Iranians. Iran’s parliament discussed the possible U.S. pullout in a closed session on Tuesday.?

However, many in Tehran and elsewhere in the country are worried about what Trump’s decision could mean for the country.

Already, the Iranian rial is trading on the black market at 66,000 to the dollar, despite the government-set rate being at 42,000 to $1. Many say they have not seen the benefits of the nuclear deal.